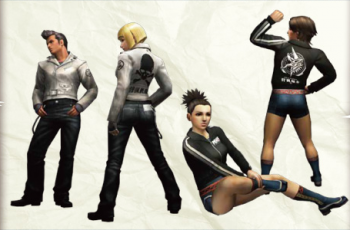 Capcom and 7-Eleven are joining forces to give Monster Hunter 3G characters a new quest and some styling outfits.

Japanese gamers have a new reason to visit 7-Eleven stores, aside tasty slurpees and Hostess cupcakes. It turns out that Capcom is teaming up with the convenience store chain to start providing free quests for Monster Hunter 3G.

From now until January 31st, you can take your 3DS system to a participating 7-Eleven and connect it to the store's 7spot service. From there, you can download an underwater quest that will have you fight Royal Ludroth, Lagiacrus, and Globu, one after another. Once you clear this five-star quest, you'll receive materials that can be used to craft exclusive gear (Andriasang notes that Capcom didn't reveal what the equipment is, but it did provide this image, which shows game characters wearing modern street clothing).

Monter Hunter 3G was released in Japan in December, where it received a 38/40 review score from Famitsu. No word yet on whether or not the game will be released in other territories.