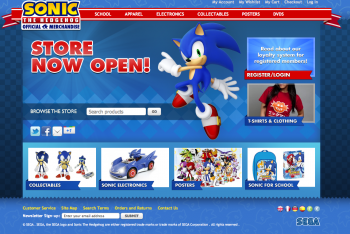 If you've been looking to pick up a ton of Sonic merchandise, Sega's got a new store that you should check out.

After more than a decade of cruddy games, the Sonic the Hedgehog brand has undergone a bit of a resurgence in quality. Recent releases like Sonic 4 and Sonic Generations have proven that the hedgehog so many of us grew up with is still around, and is still wonderful to hang out with. Sega seems to have figured out that nostalgia can be a powerful shopping motivator, and has just launched an official Sonic the Hedgehog store.

The store's got just about everything Sonic-related you could ever dream of - and a lot of other stuff that you'd probably never want - including shirts, hoodies, posters, and figurines. The shop's even got DVDs of that goofy animated series from the 1990s, though it doesn't seem to be selling any of the tie-in comic books from that era. Sega's also offering a discount on all items in the store until the end of January. If you use the coupon code "JANSALE15", you'll get 15% off your order.

For the moment, the store is only working in Europe, though Eurogamer reports that a US version is coming.