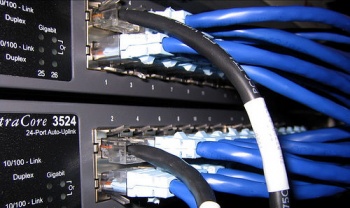 A study of internet addict's brains finds similar patterns to those addicted to narcotics.

We all know that endlessly clicking through TV Tropes or Reddit can be pretty damn addicting. Yesterday's blackouts certainly proved the power of such websites. But a new study published in the open but peer-reviewed scientific journal PLoS One concludes that individuals can become as addicted to the internet as they can to hard drugs like cocaine or heroin. What's more, the researchers found that changes to brain architecture associated with addictive internet use are the same as those produced through such drug use.

"Our findings suggest that Internet Addiction Disorder (IAD) demonstrated widespread reductions of fractional anisotropy (FA) in major white matter pathways and such abnormal white matter structure may be linked to some behavioral impairments," the study concludes.

The experiments were conducted in China and led by Fuchun Lin from the State Key Laboratory of Magnetic Resonance and Atomic and Molecular Physics. The team separated 18 "internet addicts" from a control group of 15 healthy folks and scanned all of their brains. The addicts showed "significantly lower FA than controls throughout the brain" which demonstrated such scans as a possible way to test for the condition.

"In addition, white matter integrity may serve as a potential new treatment target and FA may be as a qualified biomarker to understand the underlying neural mechanisms of injury or to assess the effectiveness of specific early interventions in IAD," the study continued.

While I'm interested in the pursuit of all knowledge, this study from a state run medical center in China seems a bit ... forced. I'm not convinced internet addiction is a real thing and comparing it to drug addiction is troublesome at best. On the other hand, there is some credence to the idea that dependence on any one thing (be it gaming, the internet or crystal meth) would have the same biological effect on our brains.