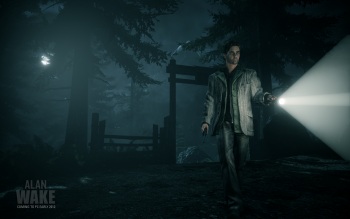 Everything you always wanted to know about Alan Wake on the PC [but were afraid to ask] can now be found in Remedy's new FAQ.

In the finest tradition of "better late than never," Alan Wake is coming to the PC. But how will it work? Will it be different than the original Xbox 360 version? Will there be mod tools? Will I need to speak English to play it? Remedy has the answers to these questions and a whole pile more in the new Alan Wake PC FAQ, posted today on the Alan Wake forums.

First up, the minimum PC requirements: dual core CPU, two gig of RAM, eight gig of hard drive space and a DirectX 10-compatible video card with 512MB RAM. To play it at a level of quality that doesn't suck you'll need "a modern quad-core CPU and a graphics card with around 2000 in 3DMark Graphics Score," while maximum settings will require "top of the line" hardware all the way around. Remedy is trying to get the game to work on Windows XP as well as Vista and 7, but a Mac version will not be forthcoming.

Alan Wake will employ Steamworks, with achievements and Steam Cloud saves and settings, and more to the point, Games for Windows Live will not be in the picture at all. Both DLC releases, The Signal and The Writer, will be included with the game, bulking it up to a 7.5GB download. The savegame system will function exactly as it did in the 360 version - sorry, no "save anywhere" option - but more options for adjusting the visuals, including the ability to turn off the HUD, will be available.

The one thing the FAQ doesn't cover is the cost of the thing, which will be announced "soon, a bit closer to release." And it will be soon enough indeed - the PC version of Alan Wake is slated to hit Steam in February.