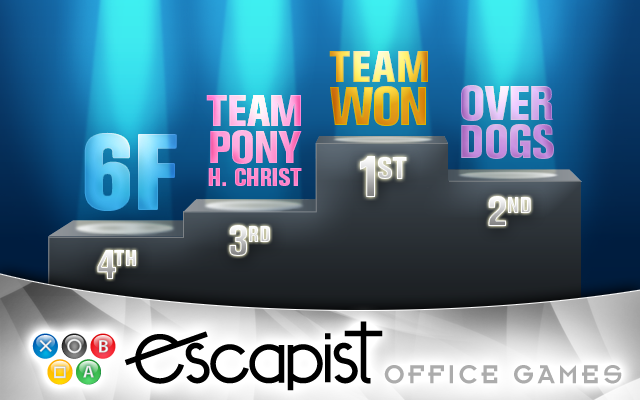 There is a great power in naming. A word of encouragement has the power to uplift, a cruel slur to maim. Many grow into their names, proving either the surety of parental forethought or the inevitability of fate, and some seem to forever struggle beneath the weight of a claim they can't uphold. The truth is that time makes fools of us all, and hindsight has a way of highlighting that absurdity.

And so it was that the Overdogs, self-titled arbiters of apocalyptic victory, maintainers of the endless lead, and perpetually favored to win, fell at the last beneath the fateful blade of Team Won.

That's right, let me just say it again so that the full impact washes over you: The Overdogs lost to Team Won. Team Won won, one might even say Team Won squared, as if the Cosmos itself intervened in an effort to avoid literal incongruity.

As it turns out, the bitter taste of ironic defeat can be washed down quite successfully by some festive holiday liqueur. We wanted to film the whole embarrassing ordeal for you guys, but it seemed important to give everyone a chance to really play. We heard you guys like games too, so hopefully you understand.

P.S. If you've seen the gallery and are wondering what we gave each other for Christmas, the answer was unilaterally Magic cards.

Critical Miss: Children of Steam #2 The Wooster 160 Comments
Comments on