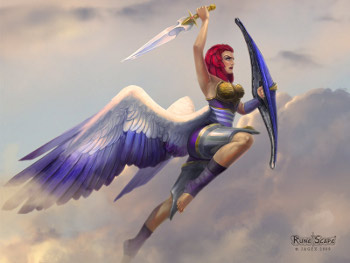 The makers of the Runescape-hacking iBot are about to eat a seriously expensive knuckle sandwich of litigation.

A lawsuit between Runescape studio Jagex and Impulse Software, the maker of the "iBot" software that allows players to level up even when they're not actually playing the game, is about to end in a big victory for Jagex in the form of an award "in excess of six figures." While the judge in the case has not yet signed off on it, a Boston court ruled last week that Impulse is guilty of copyright infringement, circumvention of technological protection measures and even computer fraud.

Along with having to fork over an unspecified but inevitably hefty amount of money, Impulse is also forbidden from providing information on how to hack Runescape, its employees are permanently banned from any and all Jagex games and it must transfer ownership of its websites to Jagex and destroy all bot code. It's even legally barred from commenting on the case, although it did issue an apology to Jagex and acknowledge that it was in the wrong.

"Throughout the course of this lawsuit, we've come to understand the harm that botting does to Runescape and Jagex.  We'd like to apologize to Jagex and to all legitimate Runescape players for the damage and harm iBot has done," Impulse said in a statement.

"In the next few weeks our websites, domains, code and customer details will be passed over to Jagex along with details of all those people who we know have developed scripts for iBot and sold or re-sold those scripts," it continued. "Shortly, all references to iBot and Impulse Software will disappear from the internet. We'd encourage all of you who have scripts or iBot to delete them and certainty not to try and use or develop them."

It's not a conclusion that most people would have expected back in 2010. In September of that year, a court denied Jagex's request for a preliminary injunction against Impulse and iBot, saying that it did not believe the studio would "suffer irreparable harm" without the injunction and furthermore, that the company was "unlikely to succeed" with its claims.