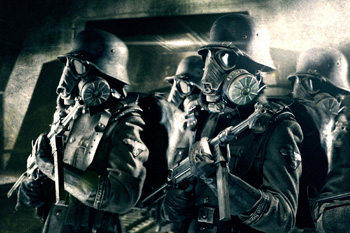 Do you remember when the first-person shooter market was saturated with WWII-themed shooters? I do. It was a terrible time. You couldn't go more than five minutes without tripping over a game with "honor," "duty" or "heroes" in the title. Then Modern Warfare came along, and we all traded in our M1 Garands for ACRs, and left Normandy for the dusty, war-torn streets of Madeupistan. Half a decade and a gargantuan pile of middling first-person shooters later, even that setting is starting to get a bit worn out.

It seems Rebellion Developments is hoping to spearhead a WWII revival with the upcoming Sniper Elite V2.

When asked if he was worried about the market dominance of modern shooters like Battlefield 3 and Call of Duty: Modern Warfare 3, Rebellion's Steve Hart responded:

"I think the market is ready for World War II. You've seen the extra press the likes of Red Orchestra 2 have gotten because all of a sudden WWII is a breath of fresh air whereas modern conflicts perhaps aren't."

"I wouldn't say developers moved on, instead they gave it the respect it needed and said 'Right, we've done that to death, let's go look at something else,'" he continued. "It just so happens that our timing for a World War Two game is better than others out there, and gamers are ready for that now. Even better for us is that we're coming out before perhaps another Call of Duty set during World War Two, as I'm sure we'll be seeing another one of those at some point."

Personally, I find it mildly disappointing that developers see their choice of settings as essentially a giant roulette wheel with "Modern," "WWII" and "Vague Dystopian Future" written on it. I mean, hey, it's not like mankind has had any other wars in its long, storied history.