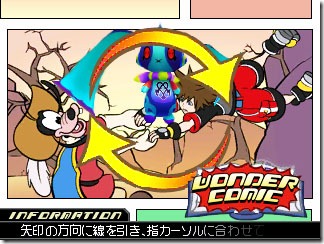 Square Enix is clearly trying to shake things up with Kingdom Hearts 3D: Dream Drop Distance. Last week, it was revealed that the game was going to be help players feel like Superman. Now, it turns out that the game will also feature sequences where the game becomes a touch-screen comic book.

This certainly sounds like an interesting mechanic, but it'll be a little while before Western gamers get a chance to try it out. King Hearts 3D: Dream Drop Distance is due out in Japan on March 29th, but Amazon has its North American release listed for December 31st.