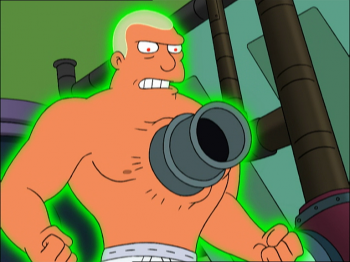 Doomsday device?﻿ Ah, now the ball's in Farnsworth's the US Department of Energy's court!

Contrary to what Star Wars would have us believe, lasers aren't able to destroy planets or mow down legions of rebel scum. Until now, that is. Scientists at the US Department of Energy's SLAC National Accelerator Laboratory have revealed that they've created an atomic X-ray laser that is literally a billion times brighter than any other X-ray. Sadly, it's not going to be used to cause millions of voices to suddenly cry out in terror and suddenly be silenced; this laser will instead be used to study the sun.

The laser is called the Linac Coherent Light Source (LCLS) and is able to fire rapid-fire laser pulses that heat matter up to over 3.6 million degrees Fahrenheit. From there, the beam allows scientists to see what's happening inside the superheated object. Early experiments were conducted on aluminum foil (the heating process was used to recreate solid plasma - a form of matter that's only found within star cores and gas giants), and the folks at SLAC seem incredibly pleased with the laser's results.

Here's how the LCLS works, according to SLAC:

Although LCLS and the neon capsule are both lasers, they create light in different ways and emit light with different attributes. The LCLS passes high-energy electrons through alternating magnetic fields to trigger production of X-rays; its X-ray pulses are brighter and much more powerful. The atomic laser's pulses are only one-eighth as long and their color is much more pure, qualities that will enable it to illuminate and distinguish details of ultrafast reactions that had been impossible to see before. Researchers envision using both LCLS and atomic laser pulses in a synchronized one-two punch: The first laser triggers a change in a sample under study, and the second records with atomic-scale precision any changes that occurred within a few quadrillionths of a second.

So, to recap: Scientists have now created an atomic laser beam to learn the secrets of the stars. How amazingly cool is that?