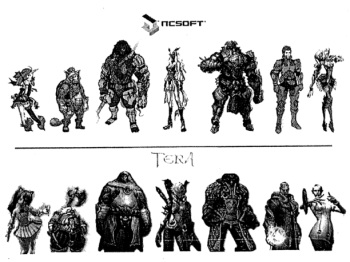 The North American launch of TERA could be threatened by legal action filed by NCsoft, which claims that Bluehole stole Lineage 3 software and artwork to use in the game.

TERA is, at the moment at least, slated to open to North American gamers on May 1, but NCsoft is looking to put the kibosh on that plan. The MMO giant has filed suit in a New York federal court seeking an injunction against the game, claiming that the former NCsoft employees who left the company to found TERA maker Bluehole Studio "made off with copious amounts of confidential and proprietary NCsoft information, computer software, hardware and artwork relating to Lineage 3" on the way out the door.

"Their business plan was simple and audacious: create a competing product using the very work they had done while at NCsoft, launch it themselves to great fanfare and acclaim, and, in the process, deal a crippling blow to their former employer," NCsoft said in the complaint, adding that a Korean criminal court convicted the former employees of stealing trade secrets in 2009. NCsoft filed a lawsuit against Bluehole in Korea in 2010 in which it won damages and an injunction against the use of its proprietary information, although the damages award was later overturned; both the civil and criminal cases are now awaiting appeal before Korea's highest court.

The lawsuit covers a lot of ground, ranging from the "secret discussions" held by dissastisfied NCsoft employees that resulted in the disclosure of proprietary Lineage 3-related information to third-party investors and the eventual founding of Bluehole, to similarities between various game elements like characters and political systems and even comments from beta testers remarking on the similarities and links between TERA and Lineage 2. The suit claims that Lineage sales and market share have declined in Korea since the launch of TERA and says the same thing "can reasonably be anticipated" in North America if the game is allowed to launch here.

"Bluehole unquestionably used NCsoft's copyright and trade secret information to develop TERA. It appears beyond doubt that Bluehole and En Masse [Bluehole's U.S. subdiary] are now also using NCsoft's copyrighted and trade secret information in its previews of TERA in the United States and will continue to do so after TERA is commercially released in the United States," the suit says. "These actions are unlawful, cause irreparable harm to NCsoft and NCI, and should be remedied pursuant to law."

NCsoft is seeking preliminary and permanent injunctions against the launch of TERA in the North America, an order to return all its proprietary stuff and "enhanced" damages due to Bluehole's "knowing and willful misconduct." Bluehole, entirely unsurprisingly, has only said that it does not comment on legal matters.