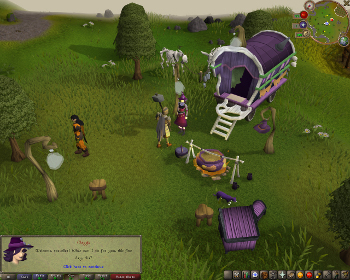 The Dutch Supreme Court has upheld the conviction of a teenager who stole another boy's virtual property in the MMO RuneScape.

Back in 2008, a pair of Dutch teenagers were convicted of theft after they "coerced" a 13-year-old boy into transferring an amulet and mask from his RuneScape account to theirs. The Leeuwarden District Court declared in its ruling that "these virtual goods are goods [under Dutch law], so this is theft."

One of the duo took his lumps like a man but the other decided to appeal, based on the question of whether or not things that don't actually exist in the physical realm can be considered property. His lawyer argued that the amulet and mask "were neither tangible nor material and, unlike for example electricity, had no economic value." The court disagreed, however, saying that the items did have an "intrinsic value" to the player because of "the time and energy he invested" in getting them.

The ruling is noteworthy because of the hazy legal status of virtual property in the real world. It's not simply a question of ownership, but of whether or not the property in question even "exists" in the first place. This is far from a definitive answer, but it is an interesting step.

According to Wizzley, the teens were also given a "suspended juvenile detention" for the assault - the "coercion" involved beating the younger boy and threatening him with a knife until he logged into the game and dropped his items - but that conviction was not part of the appeal.

On Behalf of the Chair Kickers Joe 98 Comments

Save Our Souls pparrish 37 Comments

Crush Your Enemies, Even When They're Not Online, in War of Legends Greg Tito 29 Comments