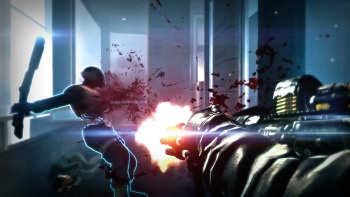 The new Syndicate shooter will not - I repeat, will not - make use of an online pass.

Electronic Arts is known for many things, among them as the innovator of the "online pass." Initially referred to by EA CEO John Riccitiello as "Project Ten Dollar," it's a simple idea: single-use codes included with videogames for bonus content that people who buy used must pay extra to get. Not everyone is in love with the system but it's become standard fare for EA releases and most other publishers have jumped on the bandwagon as well.

Which is why it's more than a little odd that Syndicate, the new Starbreeze shooter coming next month, won't make use of it. "We want as little resistance or barriers to entry as possible," EA Partners Executive Producer Jeff Gamon told Eurogamer. "The co-op is equal billing in this. We wanted everyone who owns a copy of the game to have access to the entire product."

EA's policy of including an online pass with all its games does not apply to EA Partners releases, which publishes games by independent studios like Starbreeze. Syndicate is an EA-owned IP, however, which makes the whole thing a bit fuzzy, but Gamon explained that EA took a pass on the pass because the online play is strictly co-op and it wants to ensure that as many people as possible are playing. He also said the publisher is "confident in the scope of the game" and doesn't think people will be rushing to trade it in anyway.

"There are nine maps. It's hard to say, but just to play through the maps once on normal is a good six, seven hours. To progress your character and upgrade a few weapons is a heap of content," he said. "That and the single-player campaign means hopefully we won't see much in the way of early second hand sales and rentals."

Syndicate comes out on February 12 for the Xbox 360, PlayStation and PC.