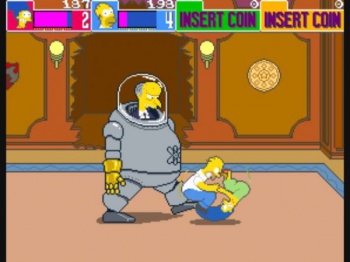 Get ready to help Marge Simpson rescue Maggie from Mister Smithers, all over agin.

Back in the late 80s and early 90s, Konami's beat-em-up games ruled the arcades. The publisher's finally clued in to the fact that a lot of people miss those titles and are willing to pay good money for them. In late 2010, we got the X-Men Arcade Game (for better or worse). Now, Konami is putting The Simpsons Arcade Game onto consoles within the next few days.

The Simpsons Arcade Game is coming out for Xbox Live Arcade on Friday (February 3rd). It will arrive on the PlayStation Network next week on Tuesday (February 7th). The game will carry a price tag of 800 MS Points ($9.99). It is, however, set to be free for PlayStation Plus subscribers.

I'm not going to lie, this is a bit tempting. I easily spent $10 on that game when I was a little kid. Maybe that's why my grades were so terrible in middle school ...

No Right Answer: Which Show Needs to Die? Firefilm 26 Comments