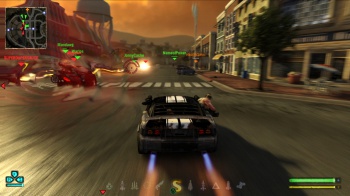 European gamers are going to have to wait a little longer for their slightly watered-down Twisted Metal fix.

Guess what, Europeans! Valentine's day is ruined. While gamers in the good ol' US of A will be spending the most romantic day of the year murdering innocents in tricked-out ice cream trucks, you get nothing but a crushing sensation of loneliness. The European release of Twisted Metal has been pushed back to March. Why? Because of localization issues.

It's not just a case of adding a few Us to make sure things are spelled correctly either, the European version is being modified to make it marginally less horrifying for delicate, cultural-types. According to a post from notoriously foul-mouthed lead developer David Jaffe, 99% of the cut material is from the game's cutscenes, which are being censored by the SCEE under his supervision. Jaffe only mentioned one relatively minor gameplay change: The 'Meat Wagon' vehicle's special attack, which previously involved a screaming, terminally-ill patient strapped to a rocket-propelled gurney loaded with TNT, has been modified so the occupant of the gurney is totally dead rather than 'nearly dead.'

"You think I wanted to change content? Fuck no - for a bunch of reasons 'fuck no'," wrote Jaffe."But it ain't my game (Sony owns the IP and funded it) and certain countries have - obviously - much stricter guidelines. AND since TM has never been a big seller outside of America, I guess it didn't make sense to have a whole bunch of different discs for each country (i.e. Germany gets disc ver. 3, UK gets disc ver 6, etc.)."

Sony hasn't confirmed a new date for the European release but Jaffe has "heard" it's on track for a March 1st release. The NA release date remains unchanged.