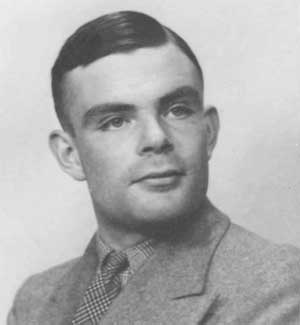 The British House of Lords has refused to grant a posthumous pardon to legendary cryptanalyst and mathematician, Alan Turing.

You might have heard of Alan Turing. He formalised the concepts of algorithm and computation. His Turing Machine, designed in 1936, was an early blueprint for the electronic digital computer. The device you're using to read this article is, in part, based on Turing's work. During WWII he worked for the Government Code and Cypher School where he devised several techniques for breaking German ciphers.

Turing's reward for helping defeat one of the 20th century's greatest threats, and ushering in its most far-reaching technological revolution, was chemical castration.
An active homosexual, Turing was arrested in 1952 after a spat with a former lover. As homosexuality was considered illegal at the time, Turing faced a charge of gross indecency and chose to be chemically castrated via female hormone treatments rather than face prison. Two years later he committed suicide.

In 2009, Prime Minister Gordon Brown apologised on behalf of the British Government, admitting that Turing "deserved much better." This lead to a petition to have Turing posthumously pardoned for the offense. The petition, which was started by computer scientist John Graham-Cumming and backed by big names including Ian McEwan and Richard Dawkins, was rejected last week.

"A posthumous pardon was not considered appropriate as Alan Turing was properly convicted of what at the time was a criminal offense. He would have known that his offense was against the law and that he would be prosecuted."

"It is tragic that Alan Turing was convicted of an offense which now seems both cruel and absurd-particularly poignant given his outstanding contribution to the war effort. However, the law at the time required a prosecution and, as such, long-standing policy has been to accept that such convictions took place and, rather than trying to alter the historical context and to put right what cannot be put right, ensure instead that we never again return to those times."

On the bright side, Turing is going to get his own stamp! I'm sure that's some consolation.