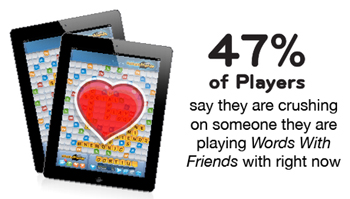 Is Words With Friends the latest, greatest way to find somebody to smooch? Zynga seems to think so.

In celebration of the arbitrary date selected to represent the concept of romantic love, Zynga has revealed the results of a recent player poll centering on how Word With Friends can bring people together. In a sexy way.

From the official blog:

In just three days, over 100,000 players were polled in game - showcasing the sheer mass of Words With Friends. In our favorite game of crossword combat, word warriors were surveyed in Zynga's first wide-scale poll about dating, doting and even cheating. 44% of players surveyed claimed they have gone for more than just the gold in Words With Friends, and flirted with another player in-game. Other interesting statistics include:

Say My (User) Name: 24% of players have exchanged their Words With Friends handle instead of a phone number.

Words With Benefits: One out of ten players say that Words With Friends has led directly to a hookup.

You've Got a HUGE...Vocabulary: 38% of players said they'd be more willing to hook up with someone if they're good at Words With Friends

Single and Ready to M-I-N-G-L-E: 40% of players said they would date someone they met through the game.

I'm a Player and I Just Crush a Lot: 47% of players say they are crushing on someone they are playing Words With Friends with right now.

Have Mercy: 35% of players said they let their sweetheart win.

Before He Cheats: 43% of players said they have cheated on someone...in the game.

I could write a few thousands words on how utterly depressing this all is. Alternately, I could write a few thousand words on how beautiful it is. However, instead, I think I'll toss it to you guys: Are these numbers an indicator of the game's success, or a really creepy reminder that no matter how benign the technology, humanity will always find a way to leverage it toward the pursuit of illicit, kinky, ill-advised sex?

Furthermore, are any of you suddenly drawn to the game like lonely, depressingly literate moths to a flame made of inexplicably attractive lady moths? Baffling metaphor aside, that's sorta gross guys.