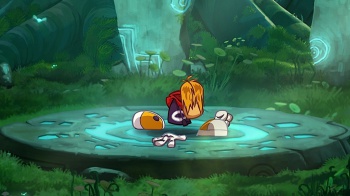 That's despite the fact Origins launched for full-retail price, with little fanfare, in the busiest period of the 2011 gaming calendar. One NDP analyst put the game's first month of sales at 50,000 - it failed to reach the US' top ten and didn't even make the UK's top 40 in its debut week. However, despite the Origins' poor performance, it seems to have done well enough to turn a profit.

"We believe Rayman: Origins, which is rated 89 percent on Metacritic with enthusiast reviews and is already profitable, has the capacity to become a long-term seller for the company," said Alain Martinez, chief financial officer for Ubisoft.

Before that, he explained, in what is possibly the saddest sentence I've ever had to type, that Rayman's less than stellar performance was offset by, of all things, the sales of Tintin and non-dance Kinect titles.

Martinez didn't reveal Rayman Origin's budget, nor exactly how well the game sold. This is the first game in years which actually stars Rayman, rather than having him play second fiddle to obnoxious merchandise fodder. Hopefully the upcoming PC port, priced at a more reasonable $29.99, will help boost the game's sales somewhat.