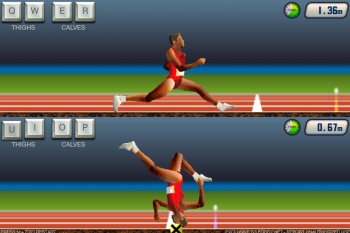 After four years of floundering in the dirt by your lonesome, competitive QWOPing is now a thing.

There was once a time when your small nation could only afford to send Qwop (the product of an under-funded training program) as its sole representative to the Olympic Games. But things have changed since that brave red-jerseyed warrior ran his first 100-meter dash in 2008, and the Motherland is apparently tired of never taking home the Gold through his questionable efforts. To accomplish this difficult feat, it's seemingly raised the athletics budget, and added two additional contestants to the Games, identical twins Qwer and Uiop. That's right, folks. QWOP, the infamously awkward four-button running game by Bennett Foddy just got awkwarder with the addition of a "two player, one keyboard" local competitive multiplayer mode.

Choosing the new mode immediately places the game in vertical splitscreen, automatically assigning one runner's thighs and calves to the Q,W,E, and R keys, while the other makes do with the U, I, O, and P. While the game does support multiple keyboard input, the idea of making things easier on you and your masochistic pal seems somehow completely inappropriate. As for how the detailed narrative cannon of QWOP ever hopes to accommodate the fact that two representatives from the same nation are in direct competition at the Olympics? No idea. I'm sure we'll see the numerous QWOP fan fiction sites in an uproar soon.

After clicking to begin, the game plays similarly to what players are used to, save the different keys and the addition of a small timer in the upper-right corner of the screen. The countdown begins once either player gathers the courage to take his or her first step that he or she can only hope will somehow eventually lead to something at least sort of close to a natural human gait. If (read: when) players either collapse into the dirt like a pile of loosely-hinged Lincoln Logs, or manage to actually make negative progress by hobbling backward from the starting line like a blindfolded goose with a regrettable leg condition, they will be magically brought back to the beginning to try again as many times as their ego allows until the clock reaches zero. Then, it's game over, and in what will surely be a massive relief for both their fingers and their soul, players are told who was able to get farthest in the time allotted, a winner is decided, and everyone can finally stop embarrassing themselves for a bit.

The impetuous for the game mode (added some four years after the original) was Austin's Juegos Rancheros, which hosted the "Foddy Winter Olympics." The event's activites included the now publically available two-player QWOP, Poleriders, Winner vs. Loser, and a strange Twister-esque rendition of GIRP called Mega GIRP that used four dance pads for the controls.

This new multiplayer QWOP mode is available to play for free (if you don't consider the possibility of losing the friend you play with to be a cost) on Foddy's website, which can be found here.

e3 2014: Nosgoth Hands On - This is Not Legacy of Kain roseofbattle 24 Comments
Comments on