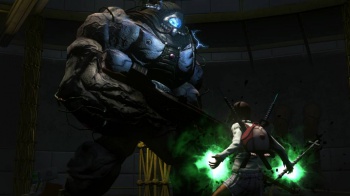 Funcom's hotly-anticipated MMO has been pushed back two months for "polishing."

The Secret World, upcoming conspiracy theory/folklore mash-up MMO from the makers of Age of Conan, is now set to arrive on June 19th, about two months later than originally slated. The announcement comes from the game's creative director, Ragnar Tørnquist, who believes the game needs a bit more time for polish and testing before release.

"Allowing for even more time to polish the game really shows just how much faith Funcom as a company has in The Secret World and how committed we are to making it the best it can be," Tørnquist said.

"The additional time will also allow us to carry out even more quality beta testing, and soon we will also be announcing several public beta events where hundreds of thousands of gamers will get to test the game prior to launch."

Tørnquist also revealed that currently 750,000 gamers have already signed up to be included in the tests, which far exceeds the interest shown in Age of Conan during a similar phase of development. Gamers who'd like to get involved can fill out an application here.

As far as delays go, this one isn't too bad, especially considering that it's a game players will hypothetically be with for hundreds of hours. If you'd like to learn more about The Secret World, you can see The Escapist's first impressions here. Also, be sure to check back with us soon for more exciting previews of the game leading up to its release!