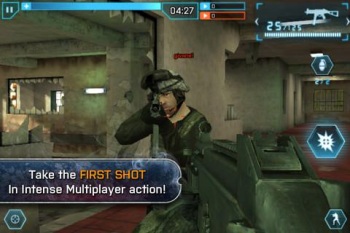 Electronic Arts has pulled Battlefield 3: Aftershock from the App Store because it was just that awful.

Allow me to set the stage by quoting this not-entirely-favorable review of Battlefield 3: Aftershock, the iOS game based on EA's hit military shooter franchise. "It's an insult; a colossal middle finger from Electronic Arts to mobile players. There's literally nothing here to enjoy, only an awful lot to hate. The fact that multiple people looked at this game and decided it was good to put on the App Store is astounding, and they'll have to live with the knowledge that they've irrevocably damaged the Battlefield brand for a lot of fans."

Wowzers! That's harsh, but apparently fair, too. The game was missing numerous features that were promised in previews, suffered from serious connectivity and lag issues, and crashed more often than a Victoria class submarine. And now even EA has acknowledged that this thing sucks so bad, it can't be allowed to exist.

"EA Mobile is committed to delivering mobile entertainment experiences that are on par with the content and quality users have come to expect from their favorite EA gaming brands," the publisher said in a statement. "To this end, we have decided to remove Battlefield 3: Aftershock from the App Store and are currently re-evaluating the app in response to the consumer feedback we've received. We thank all the fans who have downloaded the game to date."

It's not the end of the story, however, as EA said a "more comprehensive" version of the game for iOS devices will be released to the App Store later this year.