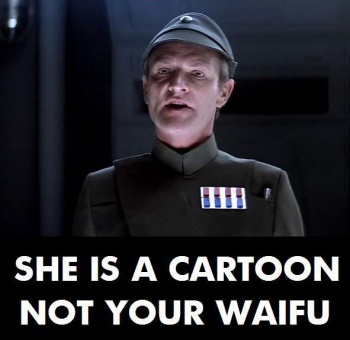 Don't want a girlfriend? This researcher thinks you may be ill. And no, your waifu does not count.

Japan's birth rate is in the pits. People just aren't doing the nasty, at least, not in ways that produce children. As a result, Japan's birth rate is declining rapidly, despite government-run programs designed to teach people to date. If the current trend continues, by 2050 Japan's population will have shrunk 20%, and the elderly will make up 50% of those that remain, presumably leading to some kind of nightmarish, apocalyptic future where gangs of octogenarians stalk the streets of Tokyo on their mobility scooters, hunting teenagers with nets and tridents.

Part of the blame for the lowered birth rate has been laid on the nerdy trifecta of anime, manga and gaming, which several critics have accused of turning virile young men into unhealthy shut-ins, unable to interact with women old-fashioned three dimensional women. Recent comments from Tomonori Morikawa, who studies relationships at Waseda University, seem aimed that particular group.

"If [one] begins thinking, 'I can't get a girlfriend, but that's not big deal,' that is a serious illness," he writes. "One of the symptoms was to erase the gap between one's dreams and one's reality."

"You really want a someone to love. But in reality, you cannot," continued the professor. "However, if you brush that off and use the excuse that you don't want a girlfriend, then you're trying to ease your serious heartbreak."

And now, because I can't get through this entire piece without at least one marginally offensive joke: Symptoms of the disease include poor dress sense, enlargement of the bank account and hand cramps.

Source and translation courtesy of: Kotaku