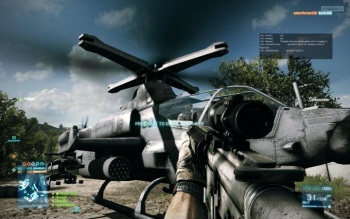 DICE makes up for a lack of updates with the announcement of one gigantic mega-patch on the horizon.

Gamers can be very particular when it comes to the mechanics of online play. Sometimes even a 1% adjustment to a weapon or player class can be the decisive change that fundamentally alters the outcome of a match (at least the players seem to think so). Because of this delicate balance, most multiplayer aficionados prefer, if not demand, that developers stay on top of the more popular franchises after release, tweaking and fixing the game until everything achieves some semblance of equilibrium. That's why, recently, a large segment of the Battlefield 3 community has begun to wonder why many of these concerns haven't yet been addressed in their game of choice. Perhaps in response, or perhaps by coincidence, DICE has suddenly revealed a mammoth list of upcoming fixes, tweaks, and balances that players can expect to experience for themselves somewhat soon.

The full list (which you can check out here) includes what can only be described as an impressive amount of major changes to everything from spawning rules to weapon damage, vehicle behavior, bug elimination and beyond. Here are just some of the highlights:

-Players should no longer take fall damage from short falls.
-Increased the inaccuracy and recoil added when a player is fully suppressed.
-Switching from primary weapons to sidearms and back now takes less time.
-The Knife now only takes two swipes to kill when attacking from a position where a takedown is not possible.
-Unguided tank rounds and RPGs will now instantly destroy Jets, Attack Helicopters, and Scout Helicopters.
-Increased the damage of the Javelin and Air to Ground missiles against laser designated targets.
-Reduced the locking time for the AGM Missiles for Jets to make them more viable against ground targets.
-Increased the power of explosions from cars and other explosive static objects.
-Jet and Helicopter collisions should now properly result in the death of both vehicles.
-Tanks can no longer drive into the water and cross the Wake Island lagoon completely submerged.
-All semiautomatic and bolt weapons, including all shotgun slugs, now have their maximum damage out to 15m.
-Zooming shotguns with Buckshot and Flechette loads will now result in a slightly tighter cone for the pellets.
-Bolt action sniper rounds now have a chance to kill at close range if the player is hit in the upper chest.
-The Accuracy increase and Recoil reduction of the Bipod has been significantly improved for Assault Rifles and Carbines.
-The Hip Accuracy bonus provided by the Laser Sight has been increased.
-The Suppressor no longer reduces the maximum damage of a weapon when equipped. Instead the Suppressor reduces the minimum and maximum range of the weapon, making it ideal for CQB and Stealth.
-Mines, Claymores, C4 and other deployable items will now only appear on the minimap when spotted by a teammate.
-Kharg Island has a new spawn zone layout, along with a bigger playable area and new cover objects. Spawn points have also been tweaked.
-Noshahr Canals spawn zones have been tweaked. Removed unsafe spawn points in the Northeast corner, and in the middle of the container area to the Southwest.

"We would like to share some of the confirmed fixes and tweaks that we have been working on to the community," wrote Daniel Matros, DICE global community manager for the official Battlefield blog. "Note that this is still not a full update list and there will be more information on this as we go forward. Also please remember that the content in this list might be changed but of course, we will also keep you in the loop about this. While there still is no ETA on the patch, we're still working on improving online gameplay for all of our dear community members."

While DICE doesn't yet know exactly when players will see this mega-patch, it did confirm that it will be for all versions of Battlefield 3, including PS3, Xbox 360, and PC. The only version of the game likely not receiving the patch is Aftershock, though somehow I doubt anyone will notice.