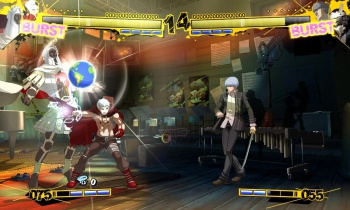 At long last we finally have confirmation that Atlus' Persona-based 2D fighter will be headed to The States.

Ever since Persona 4: The Ultimate In Mayonaka Arena was first announced, I've been following the game's progress with the sort of fervor usually associated with religious zealots or teenaged fans of Stephanie Meyer's Twilight books. You may have read my hyperbolic excitement here, here, here, here or possibly here.

Sadly, despite my borderline-romantic affection for the as-yet-unreleased fighter, nowhere in that sizable swath of content was I able to offer solid confirmation that the game would eventually reach store shelves here in America. At least, not until now.

Two days ago I received an email from Atlus' PR team that included the following joyous news:

Developed in partnership with genre master Arc System Works, Persona 4 Arena uses gorgeous, hand-drawn, high definition 2D anime-style fighters and colorful, over-the-top special effects to bring to life characters from the acclaimed, highly popular Persona 3 and Persona 4. Backed up by an original, hardcore fighting engine from one of the most respected 2D fighting game developers in the industry, Persona 4 Arena represents the biggest, most noteworthy expansion of the esteemed series to date.

While "summer 2012" is still a somewhat nebulous release window, the very existence of an upcoming, English-localized iteration of the game is the best news I've heard all week. Likewise awesome is word that the title's official North American name is simply "Persona 4 Arena," as opposed to the decidedly unwieldy "Persona 4: The Ultimate In Mayonaka Arena."

On behalf of everyone who earns a living writing about videogames, I really appreciate that sort of thing. Thanks a ton Atlus. You dudes and dudettes are the best.