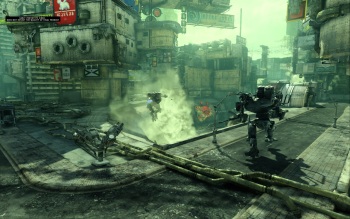 Hawken publisher Meteor Entertainment has attracted $10 million in funding from the same investors who backed the hugely successful League of Legends.

Life just got a little easier for the guys working on the fast-paced Mech game Hawken. Meteor Entertainment, which will publish the game as a free-to-play title later this year, has raised $10 million in funding for the game from investors including Benchmark Capital and FirstMark Capital, best known in gaming circles as the backers of Riot Games' hit League of Legends.

"We are seeing the rise of the direct-to-consumer model, where all is downloadable and free-to-play," FirstMark Capital Founder and Managing Director Rick Heitzmann told VentureBeat. "You can disrupt the business with a free-to-play title. Gamers are willing to pay via virtual goods to do that. League of Legends is a fantastic title, but it is just one game and one genre that has blown up. We think it's possible to produce very high quality games that have huge audiences that are willing to pay."

Mitch Lasky, a partner at Benchmark Capital, said his firm expects $8 to $10 billion to "migrate away" from packaged goods and that "free-to-play will be a lightning rod for those dollars."

"It's a phenomenon akin to other incumbent areas like music, TV, film, and newspapers, where the internet is disrupting both business models and consumption patterns," he added. "We have seen it happen again and again. The internet levels the playing field."

Adhesive Games, the team developing Hawken, was actually looking for a conventional publisher when Lasky tracked it down. He convinced Adhesive CEO Khang Le to drop that idea and instead recruited former Zombie Games CEO Mark Long to head a publishing team that will host the game and handle marketing and merchandising. Hawken is slated to launch on December 12.