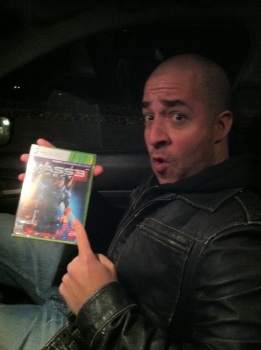 A plan to raffle off a "space edition" of Mass Effect 3 and donate some of the money to Child's Play has been called off after the owners learned that the idea was totally, seriously illegal.

The copies of Mass Effect 3 flung into space by Electronic Arts will make fine collectors editions for people lucky enough to find them. Or they could make fine sources of income as unique curios dueled over by the deep-pocketed among those fans. That was the plan Michael Davis and Miguel Droz came up with when they discovered one of the sub-orbital copies in the Arizona desert over the weekend: a raffle, at $5 per ticket, with 33 percent of proceeds going to Child's Play and the rest to help fund a new videogame company.

It seems like a pretty solid idea to me but as Kotaku was told by attorney Mark Methenitis, the man behind the Law of the Game blog, it contravenes a lot of laws, beginning with a Nevada law stating that such things are legal only if all money raised goes to charity.

"You can pretty much never rely on a charitable gaming exemption unless 100 percent of the money goes to a charity [though you can often use part of the funds to cover event costs, ie. dealers at a charity casino night]," Methenitis said. "Diverting the funds here is about as clear cut as you can get; they're using the funds for personal gain."

Furthermore, the duo made the mistake of promoting the draw on YouTube, which exposes them to federal penalties as well. And this isn't just slap-on-the-wrist stuff, either. "It's often a felony, which usually means something like 1-10 years in prison and/or a fine [usually in the thousands to tens of thousands range]," Methenitis added.

Faced with the ugly reality of the law, they first decided to give all proceeds to Child's Play before ultimately pulling the plug on the whole thing. "As of now we are officially canceling this entire thing, and refunding everyone's money through PayPal," Droz said in a statement. "Sorry about that, we should have done our homework first, but in the rush to get this done, hopefully do something cool for charity and get ourselves a kickstart to start our company, we just didn't do our due diligence. Again, we super apologize for wasting anyone's time."

It's an unfortunate end to a nice idea, but I suppose nothing is stopping them from taking their chances on eBay and then doing whatever they want with the money. Ain't the law grand?

UPDATE: Based on the response I've seen here and elsewhere, I don't think too many people see this mini-mess as anything more than a good idea that took a bad turn, but to ensure that nobody has the wrong idea about their intentions, Miguel Droz [by way of Ryan Neal] sent us the following statement:

"Hey guys, I'm the Droz from the article. I wish I could blame it on something else (it was the desert madness! I swear) but the truth is we made a rushed decision based more on excitement than stopping and considering common sense. This wasn't completely thought through, but was done with 100% honest intentions. In our excitement and enthusiasm to get our video online as soon as possible we just never stopped to think about the potential negative outcomes.

Our love for social media just took over our brains and honestly the least important thing to us was the money, we just believed it was a cool way to launch our company. What we were really hoping for was a mention on Kotaku (we just didn't realize the headline would be "Two Idiots Try Something Dumb")!

A representative of Child's Play wrote us a very kind e-mail, and provided us with links to rules and regulations and best practices when trying to do something like this in the future. We've also reached out to EA to assure them we have zero future intentions of profiting from their competition in any way, and that will will not be transferring/gifting/giving/providing this copy of the game to any other party due to the unfortunate massive legalities.

We do however super appreciate (yes, Joystiq, we really talk that way) the very kind words and support we've received from the people who did donate, and the patience and understanding of everyone who donated when it came to getting a refund and the contest being cancelled. We also have very real intentions of starting this video game company (but will be heavily Googling the potential legal troubles of any event we try in the future). So if you're at all interested in seeing how that works out, friend us on FaceBook, follow us on Twitter or subscribe to our YouTube channel for future announcements on our products to be released and fully sanctioned contests and fundraisers. We're not that bad of guys if you get to know us. :)"