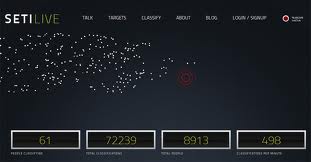 All the frequency-scanning drama of Contact from the comfort of your own home.

Astronomers have been engaged in various SETI (Search for Extraterrestrial Intelligence) projects for many years. For the most part, these efforts have focussed on giant terrestrial dishes which use radiowaves to scan the starry sky for any signals launched into the cosmos by potential space-friends for the humans of Earth. Now, you too can become involved in helping scientists search for radio patterns which might indicate galactic alien-chatter.

Dubbed SETILive, the website asks you to sign up and then set about investigating packets of data which contain too many signals for SETI's computers to deal with on their own. The data you'll be rifling through will be gathered by the Allen Telescope Array, a group of 42 radio telescopes tuned to a variety of frequencies in Northern California.

"There are parts of the spectrum where our sophisticated signal processing system is overwhelmed because there are so many signals," commented Jill Tarter, director of the SETI Institute's Center for SETI Research, in an interview with space.com. "I'm hoping to put together this army of citizen scientists to help figure out which signals to follow up on."

"The people that will do the best at this are going to be people whose pattern skills are such that they can ignore the bright pattern that's so easy to detect and look to see that there's something else there, something fainter, and see if they can in fact discover this needle that's buried under the hay," added Tarter.

"It could well be a long search," Tarter conludes. "It's a big cosmos out there."

So, that's that. The array is currently scanning the Kepler Field (which I hear is pretty big), so if you'd like to find some friends on 22b or thereabouts now is the time to get started. I wonder if the aliens have ever heard of Eleanor Arroway? We could have so much to talk about. (I heard you on the radio, I couldn't help but smile...).