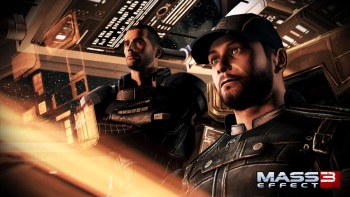 Xbox 360 owners who have their Mass Effect 2 saves "in the cloud" or transferred their saves through the cloud to a new system will be unable to import them into Mass Effect 3.

One of the great things about the Mass Effect series is the continuity across all three games in the trilogy, effectively turning into a single, massive RPG epic. Ashley or Alenko? Is Wrex still alive? How many of your crew made it out of the suicide mission? The ability to import saves from one game to the next ensures that all you've done, for good or ill, has an impact on the Big Finish.

But if you played Mass Effect 2 on the Xbox 360, and if you either kept your saved games "in the cloud" [or, as I like to put it, on the internet] or used the cloud to transfer your saves from an old console to a new one, then you've got a bit of a problem. For one reason or another, and the specifics on that are a bit unclear, Mass Effect 3 on the Xbox 360 cannot import saves that are either in, or have traveled through, the cloud.

"We are currently aware of an issue that may prevent Xbox 360 users from importing their completed Mass Effect 2 save game files into Mass Effect 3," EA said in a troubleshooting statement. "While Mass Effect 3 supports cloud saving for new or successfully imported Mass Effect 2 saves, it does not support the importation of endgame saves directly from the cloud. Additionally, this can cause it to not recognize save files that have been transferred via cloud to a console other than the one where they originated."

The only solution to the problem is to move the save file from the cloud back to the console on which it was originally created, after which it can be imported into the game. Unfortunately, if that system is no longer available, you're pretty much screwed. Another option is to load a save from near the end of Mass Effect 2, finish the game from that point and create a new endgame save file, but EA says it "cannot guarantee that this will work with certainty."

If all else fails, there's always the option of replaying Mass Effect 2 in its entirety, or you can try your luck with masseffect2saves.com, which offers instructions on converting its PC save files to the Xbox 360. I can't vouch for its reliability but a few people on the BioWare Social Network have apparently had luck with it and if you've reached that point, it's not like there's much to lose, right?