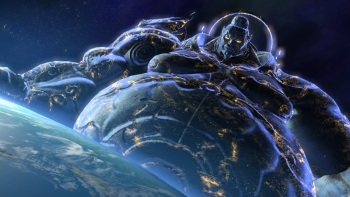 The Universal Society of Hinduism is "upset" about Asura's Wrath, saying the game trivializes the symbols and concepts of the Hindu religion.

I don't know much about Hinduism or Asura's Wrath, but a quick glance at Wikipedia tells me that the game "takes elements from Hindu mythology and blends them with science fiction." I guess that would explain why Rajan Zed, the president of the Universal Society of Hinduism, is none too happy with the game. In a press release, Zed said that "such trivializing and reimagining of highly revered symbols and concepts of Hinduism was not okay as it is upsetting for the devotees."

Durga, the murdered wife of Asura in Asura's Wrath, is actually a major Hindu deity who destroyed the buffalo-demon Mahisasura, a well-known asura - a power-seeking deity mostly living in ancient South India, again according to Wiki, sometimes considered sinful and materialistic. Zed acknowledged that freedom of expression is "important" but added that faith is sacred, and game developers should be more sensitive when dealing with such matters. If developers cannot "accurately and authentically deliver religious imagery and symbolism," he said, then they should not "unnecessarily poke into religion."

"No faith, large or small, should be plundered," Zed said. Refreshingly, he did not threaten an international boycott of Capcom, Sony, Microsoft or anyone else; instead, he said that he or other Hindu scholars "would gladly provide genuine seekers from [the] videogames industry the resources they needed for their study and research regarding Hinduism."

Hinduism is the oldest and third-largest of the world's major religions, with an estimated one billion adherents around the world. Asura's Wrath has a Metacritic score of 73, and is available now for the Xbox 360 and PlayStation 3.