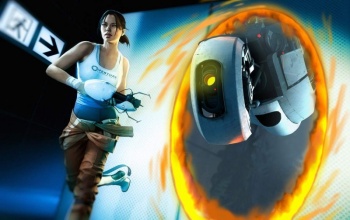 The designers at Valve quickly realized it would no longer be a Portal game without those elements.

Valve writers Chet Faliszek and Erik Wolpaw revealed that Portal 2 originally was a very different project than the final game released in stores. In a discussion entitled "Creating a Sequel to a Game That Doesn't Need One," the two veteran writers explained to the assembled GDC audience that Chell, GlaDOS, Wheatley, and even portals weren't intended to appear in the sequel to the popular first-person puzzle game.

Fair warning, spoilers for the story of the Portal games are within. Tread lightly.

The first question Wolpaw and Faliszkek tried to answer was "Why make a sequel?" Even the writers admitted that the game was pretty self-contained. The protagonist escapes the lab, the villain is vanquished. Why go back to the well? The simple answer was enthusiasm: The staff at Valve was excited to create another Portal game and "so many people wanted to make it," admitted Wolpaw.

The team, however, wanted something completely fresh. "We cut Chell. She got out [and escaped at the end of the first game], good luck to her, who needs her?" explained Faliszek about the staff's original thinking. "[We initially] cut GlaDOS. She kinda died at the end [of Portal]. She had a nice little story. It's time for a new villain." But even more strikingly, the Valve team "cut Portals. Sure, name is in the title but we figured we'd figure it out later. We had a sexy new mechanic and we were super confident in that."

Without the protagonist, villain, and main mechanic of the original game, Portal 2 was free to pioneer new territories. The new villain was supposed to be Cave Johnson. Fans of Portal 2 will recognize the JK Simmons-voiced eccentric former president of Aperture Science as a recurring guide in Portal 2. But originally, "He was the main character...he was going to be this southern billionaire," explained Wolpaw. "GlaDOS was only going to appear in a cameo." In the original vision of the game, she'd appear at your feet and say "some legalese stuff" about how dangerous the testing was, but she was most certainly in a secondary role.

The setting was also different, taking place in the eighties, "about twenty years before the events of Portal 1," and after a "robot uprising," mused Wolpaw. The original sequence for this game had the player waking up on a desert island which crumbled around them to reveal itself to be part of the Aperture testing facility. Aperture was always part of Portal 2, with Wolpaw calling it "The Foundation upon which Portal was built" and adding that the developers and players alike enjoyed playing around in the lab's "madhouse of science."

The feedback for this initial version was that it wasn't "Portal 2. "Lesson 1: Don't need to burn everything in the ground," Faliszek stated. "So they added back in Chell, GlaDOS, and Portals."

"Bringing Chell back was the least intuitive part," explained Wolpaw. But "when GlaDOS wakes up and she doesn't recognize her" that became a problem. They needed Chell back in to have that moment of recognition, to trigger the emotional response they were looking for.

There were some subtle changes to the game as well. The elevators were completely changed, which the writers admitted made little sense given the game's story. "If you're improving it, players don't care," Faliszek explained.

Wheatley presented a major problems for the staff, as they originally had an entire sequence where you could drop Wheatley down the stairs - a moment they liked with a different personality ball in an earlier version of the game. But the potential to drop him in the wrong place wasted too many resources to program. So, Wheatley remained fixed to the player in the short segment where you carry him.

Also, the original version of Wheatley had Valve animator Richard Lord as the voice actor. He was much loved by initial testers in the short segment he was in the game. But Wheatley was supposed to die when GlaDOS awakens, Faliszek explains.

When they recast Stephen Merchant in the role and brought Wheatley back, many fans were upset by the voice change. "Law of sequels: you can't win," said Wolpaw. "Or you can win, but can't have a flawless victory."

Wheatley ultimately came back because the writers felt you couldn't bond with the other personality cubes in sufficient time. But they still needed an ending, or should I say, endings.

Portal 2 was supposed to have multiple endings. You could die within the first two minutes, get a funny song that talked about your short life, and that was it. Or you could have another "fake" ending where you shot a portal into the moon and get sucked out into space and died. You'd get another song and another "fake" ending. "Play testers loved it," Wolfpaw admits. But they completely overestimated how many clever "fake" endings they could come up, so Valve cut them.

But they knew that in the end, GlaDOs had to be replaced in her chassis, Wheatley had to have his comeuppance, and somehow Chell had to survive. The original ending called for the stalemate between Wheatley and GlaDOs to be Chell simply saying "Yes," to break the tie, giving her, her first lines of the series. "Boy, did it suck," laughed Wolpaw.

In the end, they brought back the moon anecdote from one of the fake endings to make what Wolpaw claims is the appropriately "totally awesome" and "completely stupid" way to end the game. The writers at Valve simply "needed the time to figure out the obvious." The lesson, he explains, is the "answers for what you need to do are buried in what you've already done."