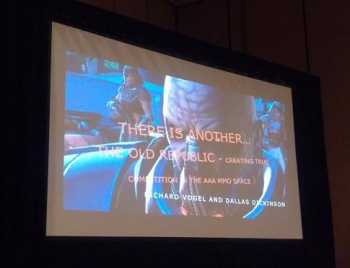 BioWare's TOR team could only compete with WoW by planning, and not being afraid to throw out the plan if it wasn't working.

To make Star Wars: The Old Republic, the staff included 30 people in production, 75 designers, 80 engineers, 40 platform experts, 10 people to localize the game, 10 composers, 140 artists, and 280 people in quality assurance. That's a huge team, conjuring images of hundreds of Ewoks trying to take down an AT-ST. Richard Vogel, executive producer and VP of production at Bioware, and Dallas Dickinson, director of production at Bioware, spilled the team's secrets on how SW:TOR became a genre leader and a true competitor in the AAA MMO space at a panel called "There Is Another ..." at GDC 2012. Dickinson learned early on that with such a huge team making such an extensive game, there were going to be a few casualties.

Early on, the goals of SW:TOR were lofty. In order to compete in the MMO marrket, Dickinson knew you had to broaden the market (the "other three-letter game that shall not be mentioned" did this well), differentiate yourself, build enough content, and update consistently. In essence, you need a plan. The Star Wars license alone doesn't guarantee success.

Part of that big plan is to innovate, scale, and triage - but in a smart way. One example is the way Bioware chose to innovate. They wanted to revolutionize storytelling, have a sidekick always present, and make sure the combat was cinematic and have a true range combat system. Why these three innovations? All three of them fit the Star Wars theme.

"You could live your dreams in the Star Wars universe. That is the key goal that drove every design decision," said Vogel.

One area where they initially failed was with scaling. There are over 240k lines of dialogue in SW:TOR. Over 4,094 characters. Over 321 actors used to create these characters and dialogue. They're in the Guinness Book of World Records now for this gigantic effort. There's more voiceover work in SW:TOR than all previous Bioware games combined. The end goal for the game was 20 full planets, over 90 unique areas, and more than 200 hours of gameplay per class (with eight classes).

"This is a ridiculous amount of content," said Dickinson.

So how can you manage a team like this with very diverse craftsmen? "Very badly, at first, is actually the answer," said Dickinson. The team failed at first with scaling up and hiring. They began to realize that it was important to find skillsets but also to find a fit for each team. Production methodologies and processes had to be changed as development went along.

"There are probably dolls of me in the studio with needles through the eye," said Dickinson after discussing the need for change. Iterative development also means iterative development of processes. That's healthy, and people need to embrace the change. Dickinson said that wasn't always the case, however, and that the mentality was somewhere along the lines of: "Every time we change a process Jesus kills a baby." Managing people and dealing with change was a challenge for the SW:TOR, especially because it was the biggest BioWare has had to deal with..

There were six weeks per milestone (with one week after for fixing bugs). The teams regularly had a "Death Star" meeting, sometimes once a day, with leads of the disciplines meeting to cut features. They had to triage often to make goals - triage is when you lose your "nice-to-have" features (which makes a team sad) but has to happen.

"We made people cry in the 'Death Star' many times," said Vogel.

Ultimately, to make a massive project like this a success, it comes down to balancing the project fulcrum - scope and quality versus resources and time. It's about the plan, the trade-offs, and effectively managing all of the people involved. And having the world's most popular IP certainly doesn't hurt.