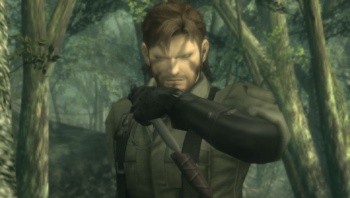 Konami has dumped a ton of screens from the upcoming Vita iteration of its Metal Gear Solid HD Collection, and they look exactly as you'd hope.

Go ahead, take a moment to rifle through the images in that gallery below (or the expanded collection over at Andriasang). We'll wait.

Done? So? What do you think?

Granted, they're all from the Japanese version of the game, and thus may change slight in the transition to English, but based purely on the aesthetics, that's a pretty solid look for games that began life on the PlayStation 2, no?

And remember, boys and girls, those images will only be enhanced by the Vita's gorgeous OLED screen. I'm still not sure what combination of magic and techno-sorcery Sony built into that thing, but absolutely everything looks better when seen on a Vita.

The only real question remaining is how well the notoriously complex Metal Gear Solid control scheme will translate to Sony's latest handheld when the HD Collection hits store shelves later this year. Specifically, in what way Konami and Kojima Productions will opt to utilize the handheld's dual touch screen technology. I have faith that they will be able to figure out some novel, bizarre use for the tech, but we still ought to keep a fair selection of fingers crossed that it doesn't totally obscure the experience in favor of gimmicky tactile experimentation.

Still, worse comes to worst, it should prove better than the upcoming 3DS iteration of Metal Gear Solid 3, so that's something.

e3 2014: Entwined is Much More Accessible and Enjoyable Than it Appears Encaen 2 Comments
Comments on