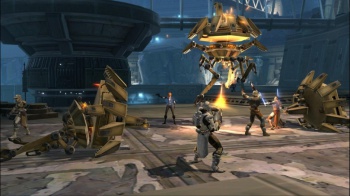 All would-be Jedi Knights and Sith Lords will have three days to see if it's worth their money to travel to a galaxy far, far away.

Star Wars: The Old Republic may be one of the most successful MMOs on the market, but that's no reason for it to rest on its laurels. Like the relentless Galactic Empire engulfing everything in its path, EA and BioWare want more players to see what all the lightsaber-swinging, laser-shooting, dialogue-choosing fuss is about and hopefully subscribe to the game in the process. With that in mind, BioWare is offering prospective players a chance to play The Old Republic - with a few restrictions - for free from March 15 through March 19.

The opportunity to play The Old Republic without giving up your hard-earned credits comes with a few caveats. The weekend trial lasts only from midnight CST on March 15 to 2 AM CST on March 19 (which is still roughly three days - a pretty generous weekend). Trial characters may only advance to level 15, and access a limited number of worlds (and other interstellar locations). They will also be subject to limited functionality for chat, mail, trade, and party member skills. However, there do not appear to be restrictions on choosing a server type or creating more than one character, nor does BioWare have any plans to delete characters after March 19. Players who enjoy their time enough to commit to a subscription will find their trial characters ready and waiting for them.

Dropping $60 plus a monthly subscription fee on a game sight unseen can be a tough proposition, but The Old Republic's trial weekend may alleviate some of that uncertainty. Granted, downloading a multi-gigabyte game via crowded servers will take significant time and bandwidth, but if you have those to spare, this could be your best chance to check out The Old Republic until the next weekend pass comes around. Interested parties should check out the offer. If the game isn't to your liking, well, you can always take it out on the younglings.