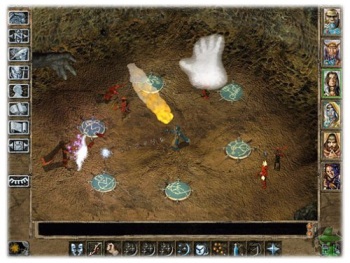 Last week's countdown at BaldursGate.com was a lot of fun. We got to daydream for awhile about Baldur's Gate 3, and then we got to make jokes as the site predictably exploded when the countdown hit zero and we all floundered around for awhile with no idea of what was actually going on.

It turned out to be the Baldur's Gate Enhanced Edition [and BG2EE], which is very cool but still, deep down, just a little bit disappointing, too. We all knew a Baldur's Gate 3 announcement was never actually going to happen, but... what if it did?

It might yet. "Baldur's Gate 3 has been our long term goal," Tofer told GameSpy. "We have a lot of things to put in place before such a project can be launched. So currently there is no such project but that's the one we want to do. Our thoughts have been that Enhanced Edition for BG 1 and 2 just make sense before there's any Baldur's Gate 3."

It's no surprise that if and when the time comes, the team is looking at a Kickstarter project for funding. "It just makes so much sense and solves so many problems," Oster said. "I think what Brian [Fargo] is doing with Wasteland is very interesting."

Given the inevitably sky-high expectations for Baldur's Gate 3, not to mention the rather final ending of Baldur's Gate 2: Throne of Bhaal, it's hard to imagine how any new addition to the series could possibly satisfy. On the other hand, I'm pretty sure there aren't too many fans who wouldn't leap at the chance to play a new Baldur's Gate game. It's a bit of a "damned if they do, damned if they don't" situation, although personally I'm very much hoping that someday, they do; and if they do, you better believe that I will too.