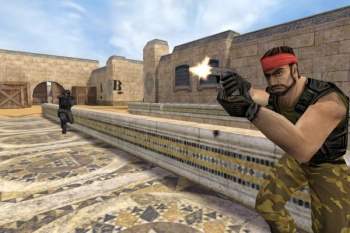 Seven dollars can't buy much these days, but apparently one Manila resident felt that the sum was worth killing over.

Police in the Filipino capitol of Manila have arrested a suspect they believe murdered a man following an argument over a game of Counter-Strike. The two men, along with a group of others, were playing the popular Valve shooter in one of the city's many internet cafes. A 300 peso (roughly $7 USD) bet was placed on the outcome of the match, but when it came time to pay up the losing team began arguing the result.

The alleged murderer then followed Eric Cristobal back to his home, where police say Cristobal was stabbed to death.

"He [Cristobal] did not start the quarrel. He just got caught up in it. But they all had long been betting on Counter-Strike," said police investigator Noel Ibanez, following the unnamed assailant's arrest.

There's no punchline here, boys and girls. A man is dead over a petty dispute and an even more petty amount of money. Sometimes the world is a swirling ball of terrible.