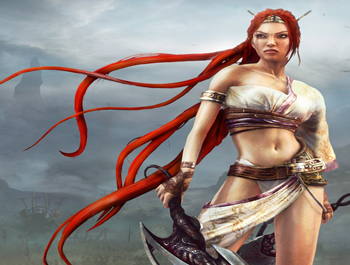 Tameem Antoniades answers the most important question you have about DmC: Devil May Cry: "Where are all the boobs at?"

Since the announcement that Enslaved and Heavenly Sword developer, Ninja Theory (No, not Team Ninja, we go through this every time we talk about this game), would be taking on the Devil May Cry series, I've heard nothing but complaints. Complaints about Dante's questionable new design, complaints about the engine and its 30FPS limitation, complaints about the brief snippets of gameplay we've seen and complaints about the music. I've even seen one particularly irked gamer take issue with the game's logo. The one thing I haven't seen anyone complain about is the game's notable lack of squishy hobblers - breasts, if you're an intellectual. The question did come up during a recent interview however, and Ninja Theory boss, Tameem Antoniades, complete with his suspiciously familiar haircut, was on hand to answer it.

"I've nothing against big tits," he assured PSM3. "I'd rather have my head resting on a pair right now - but if you're going to try and stimulate someone on different levels, there's better ways to do it."

"If you look at the stars in movies, the women people find really attractive are often not the ones with the biggest tits. You've got to be attractive on a different level."

True enough, female game leads do tend to be somewhat less aerodynamic and considerably more buoyant than their movie counterparts - Either due to the relative youth of the medium, or simply because of the (wrong) common consensus that most gamers are of the spotty, hormonal male variety.

"We did that in Enslaved with Trip. People loved her, not because she had big breasts and high heels, but because she felt like someone who could be your girlfriend," he said.

"That to me is more attractive than a prostitute walking around with a big gun," he added. "Not to demean prostitutes - it's a valid form of commerce."

Antoniades did answer some of the more pertinent criticisms leveled at the game. Apparently, Ninja Theory decided to use the Unreal engine, despite its slower performance, because the company didn't want to "spend a year learning a new engine."

Talking about the changes Ninja Theory have made to the series' lore, Antoniades said he understood some of the fan outrage.

"People form a relationship with a series, and if that gets broken or bastardized, people get upset. That's understandable. So I don't dismiss it," he said. "We've all been there: the new Star Wars stuff, it's changed a lot but not added anything. I think we've added stuff. We've added interesting things to the series that you wouldn't have got from Capcom Japan. If we do our jobs right, you'll get a good, fun game with interesting angles that bring something fresh to DMC."

He also addressed the common insinuation (so common it cropped up in the beginning of this article) that Dante's new design is based on Antoniades himself.

" He's a decade and a half younger than me, way better looking..." he said. "The only thing he's got is black hair. And he's male. I didn't design the character. I didn't go to our designers and say, 'I think it's a really good idea if we make the new Dante look like me, because I want to be in the game.' They'd laugh at me. They'd throw me out the window."