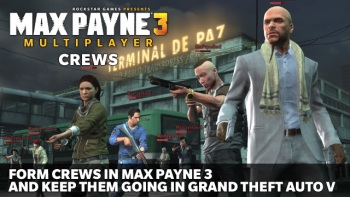 Rockstar is pushing the multiplayer envelope with Max Payne 3 "Crews" that will offer unique gameplay options and even carry over into future games like Grand Theft Auto V.

Online multiplayer action is fun but it's rarely very deep, and while conventional gaming clans have been around for years, they tend to be DIY affairs and not always terribly welcoming to new members. That's something that Rockstar is aiming to change with "Crews," a Social Club-integrated system that will debut with Max Payne 3.

"Crews are groups of players that you can join up with via the Social Club that go beyond what's possible by using your Xbox or PS3 friends list, and joining crews will have benefits both in-game and out," Rockstar co-founder Dan Houser told IGN.

Crews can be either private or public, with no cap on membership size, and help casual players keep up by offering experience bonuses to members who perform special tasks, like killing rivals during a Feud. Crew members will automatically be matched up if they're in the same lobby and will have customizable emblems on their equipment so everyone in the game knows who they run with. Players can initiate "Vendettas" against opponents, singling them out for special attention, and because everything is tracked through the Social Club, even non-Crew matches can have an impact.

"You can be playing any team-based game with a completely new set of players, but if you spot two or more members of a crew you're feuding with on the opposite team, any kills you get against them will count to the overall feud so rivalries will spring up automatically - and when they do, you'll be notified and the grudge will come to the forefront of the game," Houser said.

But perhaps the most intriguing part of the Crew system is that it's persistent. "Multiplayer is an ever-more important part of all our games moving forward. And by creating crews through Social Club, the crews that you create in Max Payne 3 will be ready and available for you to play in Grand Theft Auto V from day one," he continued. "It's all part of our larger approach to make multiplayer deeper and richer than what's currently available, much more easily accessible to the newcomer and rewarding for the hardcore."