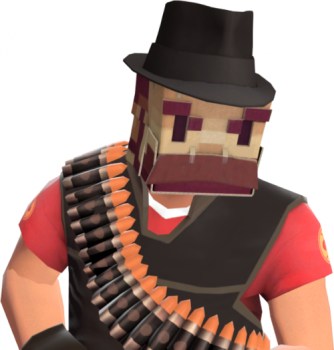 Notch has begun to think about programming blocks in a whole new way.

Here's a fun fact: If anything on Earth, be it a book, theatrical production, stuffed animal, or newly-discovered species of Ugandan lizard, is or has ever made money, there's a Hollywood producer somewhere hoping to wring it out in front of a video camera like a soggy, soggy wealth sponge. The same can, of course, be said for videogames, and with Minecraft making enough money to justify the use of bulldozers for organizing its biannual budget, it shouldn't come as a surprise that there's no shortage of movie-making money men showing up on Mojang's door with a boquet of roses in one hand, a creative licensing contract in the other, and a wry 1920s-silent-movie-villain smile plastered across their lips.

According to recent financial filings, Minecraft has, to date, generated a whopping $80 million for Mojang via 25 million registered users, 5 million of whom have already purchased a full copy of the game. But while it's safe to say the indie game itself has reached towering peaks many never thought possible, its merchandising revenue has brought in but $1 million. Any number boasting seven digits is nothing at which to scoff, but those dollar signs are dwarfed when compared to the money milked out of something like Angry Birds, the quickly-growing empire created by similarly Scandinavian developer Rovio. So, with games like Angry Birds and the like already working movie deals, perhaps, Mojang thinks, it's time for Minecraft to consider doing the same.

"We've been approached by a number of high-profile Hollywood producers and asked to do TV shows," said Mojang's chief executive, Carl Manneh. "We may do that. It's hard when you don't have any experience and someone comes to throw these ideas around. We have so much to focus on with just the game development and growing the business. But if the right idea comes along and the right people that we'd want to work with, we'd say, why not?"

As a game with little narrative focus, one really has to wonder what sort of concepts these producers are pitching. The truth is, though, that Minecraft is such an open concept that it could really be anything. In fact, I'm sure any Escapist could do just as well. Just think of any terrible idea for a long-running story and finish the pitch with " ... but everyone's made out of blocks," and you're probably coming close.