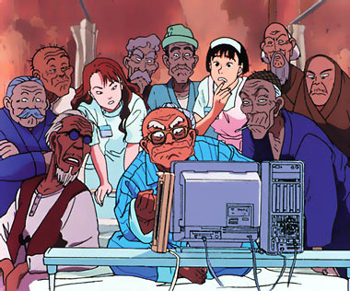 Legendary mangaka, Katsuhiro Otomo, is working on his first long-form manga in more than twenty years.

Since Akira finished its eight-year run in 1990, Otomo has stuck to directing and producing the occasional one-shot manga. In an interview with Japanese mag, Geijutsu Shincho, Otomo unveiled his most recent short manga - a full-colour science fiction short called DJ Teck's Morning Attack - and mentioned he's working on a new long-form manga.

Otomo didn't give away any details about the title, save that it's set in the Meiji Era of Japanese history (1868-1912) and it's going be in the shonen genre. For those of you unfamiliar with manga terminology: Shonen manga (shōnen or shounen, if you're anal, or would that be shonen-ai? Congratulations to all three of you who got that joke) generally refers to action-packed nonsense like Bleach, One Piece, Dragon Ball Z, which are designed for boys between the ages of six and fifteen. Otomo's previous work, with its complex characters and their propensity to die horribly at the tip of a hat, generally falls into the more serious "seinen" genre. That being said, a lot of his work does happen to star young men determined to succeed against seemingly impossible odds, a staple of the shonen genre. Naruto creator, Mashashi Kishimoto, has cited Akira as one of his major influences.

The last time Otomo penned a long-form manga, the result was a seminal work that is still influencing comic writers around the world, and a film that pretty much single-handedly established anime as a legitimate, "grown-up" medium in the west. I'm excited to see what he does next.