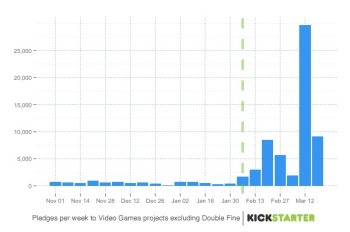 The Double Fine Adventure Kickstarter was a huge success, but it's also provided a windfall of good fortune to other Kickstarter projects.

The Double Fine Adventure Kickstarter is far and away the most successful Kickstarter of all time, bringing in $3.4 million from gamers anxious for some of that old-time Tim Schafer magic. But do all those people throwing all that money at a single project mean that other projects will suffer? Are the little guys at risk of being crowded out by one or two mega-Kickstarters?

Based on what's happened since the DFA Kickstarter launched, the answer is a definite "no." In fact, if anything Double Fine's effort vastly increased awareness of Kickstarter and attracted a huge number of people eager to invest in various other projects that tickle their fancies, particularly in the videogame category. In the first two years of Kickstarter's existence, $1,776,372 had been pledged to various projects in the category; in the six weeks since, $2,890,704 has been pledged, and that figure doesn't include Double Fine's own numbers. Add that to the total and you have $6,227,075 in six weeks, almost quadruple the total pledge over the previous two years.

Even better, of the roughly 60,000 people who made their first-ever Kickstarter pledge to the Double Fine Adventure, 13,715 of them - nearly a quarter - have since contributed to other projects. Games are unsurprisingly the biggest beneficiary but categories ranging from Technology and Film & Video to Fashion, Food and Dance have all seen support from people who were first attracted by Double Fine, to the tune of over $875,000 across 1226 projects.

"Combined, Double Fine and Order of the Stick have raised more than $4.5 million, and their first-time backers have pledged another $1,083,937 to 1000 other projects," it continues. "Double Fine and Order of the Stick's achievements have inspired tons of press and even other projects - more than 200 of their backers have started projects of their own."

Another positive trend was started last week by Brian Fargo, the man behind the impressively successful Wasteland 2 Kickstarter [$1.6 million and counting], who launched the "Kick It Forward" campaign calling on funded Kickstarters to pledge five percent of the profits from their finished products to other Kickstarter projects.