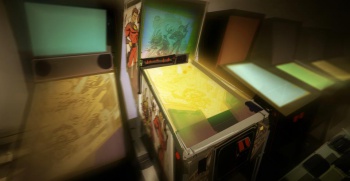 Insomniac Games set out to make the greatest pinball videogame the world had ever seen, but it vanished under mysterious circumstances.

Just as pinball machines have slowly disappeared from pizza parlors, boardwalks, and arcades worldwide, so too did an ambitious pinball sim from Insomniac fall by the wayside. Even while the popular developer was hard at work on Resistance 2 and Ratchet & Clank Future: Quest for Booty, Insomniac began development on 1080Pinball, a proposed downloadable title that would have merged a meticulously physics-heavy pinball game with original tables based on the greats of yore. While the developer pulled the plug on the project in mid-2007, Insomniac has not yet given a reason why.

The information on the canceled game came by way of Insomniac's new Facebook Timeline. "[1080Pinball] was intended to be the most realistic pinball simulation ever (including simulating weight of ball, gravity, and friction of table surface, as well as accurately modeling the "kick bumpers"), running in 1080p and 60fps," it reads. The page goes on to explain that the game aimed to be for pinball simulations what Gran Turismo is for driving games, and that this reveal should explain the vast number of pinball machines seen in Insomniac's offices, as well as its Pinballz music video.

Those who are interested in the reasons behind the game's ultimate fate can tune into the next episode of The Full Moon Show, Insomniac's podcast. 1080Pinball may not have excited Insomniac fans quite like Rachet & Clank or Resistance, but the company clearly put a good amount of money and effort into research and development. Consequently, its cancellation may involve bigger factors than just development costs and available resources. As the old song goes: "There has to be a twist."