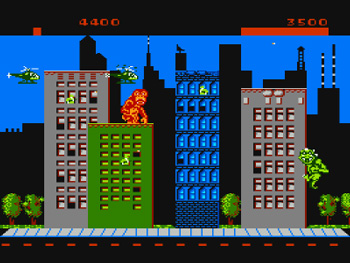 Hollywood hopes that the 1986 arcade classic can become the next Independence Day.

Say what you will about the eventual smattering of latter day sequels, but the original 1986 arcade game, Rampage was old-school brawling at its purist. There wasn't much narrative of which to speak--just a whole lot of jamming on the A button to punch things--so what film studio New Line sees in there worthy of a feature film is beyond me. Still, it seems my personal confusion has done little to stop it from hiring on Ryan Engle (director of the short film On a Clear Day and---oh, that's it) to helm a big screen version of George the Giant Mutant Gorilla's saga of destruction.

For those of who you don't remember, Rampage starred three monsters: King Kong George, Godzilla Lizzie, and a giant wolf creature named Ralph stomping around after witless pedestrians, nomming on their heads, and swatting away their puny, puny war helicopters. There was also the picture of a newspaper article thrown in there at some point, pointing to some amoral sciencey organization that created them.

With this lush narrative landscape as a foundation, producer John Rickard is hoping to develop the upcoming Rampage film into what he would consider a franchise similar to Independence Day, but with potentially significant merchandising tie-ins. A shoot-date or writer has yet to be announced.

Come to think of it, I suppose there is one possible direction I could see this film taking. So, let's see, we have two boys and one girl, all of whom are at some point shown in their underpants. Perhaps we're being set up for some sort of Hulk-ified tweenage romance? For now, it's impossible to say, but if we're subjected to waves of Team George and Team Ralph merchandise in the near future, know that you heard it here first, people.