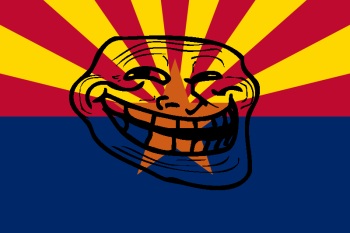 The state of Arizona is enacting legislation that will make trolling a crime.

The internet can be a pretty ugly place, especially for those unprepared for its rough-and-tumble ways. The reasons are many and varied, but they can all be boiled down to one essential component of the human condition: people are jerks. If you've been playing online for more than, say, a couple of weeks, I can pretty much guarantee that you've trolled and been trolled. It's the nature of the game.

But the state of Arizona is looking to change all that with House Bill 2549, an update to its telecommunications harassment law intended to bring it into the digital age by replacing the word "telephone" with the phrase "any electronic or digital device." The net result is this:

"It is unlawful for any person, with intent to terrify, intimidate, threaten, harass, annoy or offend, to use a telephone any electronic or digital device and use any obscene, lewd or profane language or suggest any lewd or lascivious act, or threaten to inflict physical harm to the person or property of any person."

It doesn't sound too terribly unreasonable at first glance - it probably should be illegal to terrify or threaten people with violence, after all - but the trouble lies in its overly vague and wide-reaching language. It'll be illegal to annoy someone on the internet? We've all done that; I do it pretty much every day. I'm probably doing it right now.

Yet under the terms of this amendment that will be a class one misdemeanor, which carries a maximum penalty of a $2500 fine and up to six months in jail. And don't think that simply not living in Arizona will protect you from its legal clutches, as under the terms of the law offenses "are deemed to have been committed at either the place where the communications originated or at the place where the communications were received."

There's a huge gulf between an ongoing campaign of harassment and terror and the occasional f-bomb or "goatse surprise," but this law appears to make no distinction. And while it may be comforting to say that law enforcement can make the distinction for itself, do we rely want to rely on the discretion of the police for such things, especially in Arizona?

Escapist Expo: You Game Like A Girl: Tales of Trolls and White Knights Team Hollywood 12 Comments