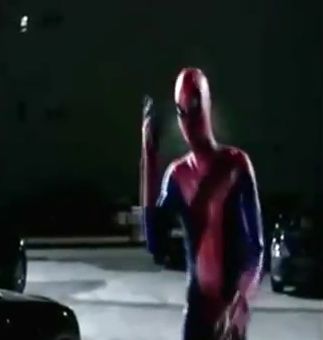 Andrew Garfield hams it up in a blue and red costume.

I think I'm the only person in The Escapist office who doesn't hate the third Sam Raimi Spider-Man film. Nevertheless, cramming Venom and Sandman in the same movie might have killed the franchise enough to warrant a prompt reboot, but what I've seen of Andrew Garfield - who you might recognize from The Social Network - there doesn't seem to be a compelling reason to see his Amazing Spider-Man over Tobey Maguire's Peter Parker. These three clips unlocked from codes found in Kellogg's breakfast cereals through a promotion and promptly uploaded to YouTube by a Spanish speaking gentleman don't change that first impression.

In the first bit, Garfield is awakened on a New York City subway car and jumps up to grab the roof, frightening innocent commuters in the process. How did he get away with that without wearing his mask? And why was he asleep on the subway? Doesn't Peter Parker know that's illegal? So many questions.

The second clip is supposed to be funny, with Spider-Man in full regalia toying with a crook by sticking him to a wall with webbing. The sneezing gag is pretty funny, I suppose, but there's something off about Garfield's smarmy delivery.

The final clip repeats an age-old joke but not very well. Unused to his super-human strength, Peter Parker can't even brush his teeth without smashing the tube, ripping off the faucet and finally the door knob. I don't have a problem with reusing good sight gags, but Sam Raimi basically did the exact same thing in the first Spider-Man with Tobey Maguire fumbling around his bedroom.

Here's a free tip for Marc Webb on directing The Amazing Spider-Man: If you're going to remake a movie, don't directly steal scenes from the previous director's interpretation.

Next thing you know, Webb will ask Bruce Campbell to do a cameo.

Escape to the Movies: The Amazing Spider-Man 2 - The Movie That Broke MovieBob MovieBob 314 Comments
Comments on