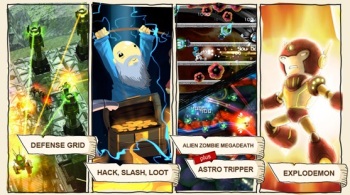 The new Indie Royale bundle is a five game collection of awesomeness, and that's no fooling.

It's a bit past April Fools Day but better late than never, as they say, especially when it comes to sweet game collections like the new Indie Royale. It's five more indie titles at a wickedly cheap price, plus a musical bonus for the non-cheapos out there. First up, the games: Defense Grid: The Awakening, Alien Zombie Megadeath, Explodemon and Hack, Slash, Loot, plus a "bonus" of Astro Tripper, although what makes it a bonus and not just the fifth game is beyond me. Speaking of bonuses, anyone who pays more than the minimum, currently at the $5 mark, will also get Rock: Deluxe Edition, the "Japanese 80s-style chip album" from Sexy Synthesizer.

Buying the bundle gets Steam and Desura copies of all games except Explodemon, which for some reason is listed only for Desura, while Hack, Slash, Loot is also available in Mac and Linux versions. And as always, the generous folks who kick in bigger payments make life better for the rest of us by forcing the minimum price down.

Indie game bundles might seem a little tiresome or routine at this point, five games for five bucks is worth some attention no matter how many times it happens. You can't even buy lunch for that. So skip lunch and play games instead at indieroyale.com.