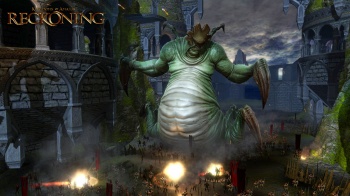 But otherwise he loves the game for which he wrote the lore.

R.A. Salvatore is the prolific author of fantasy novels set in the D&D world of the Forgotten Realms and creator of arguably the most valuable D&D character ever in Drizzt Do'Urden. But he also contributed heavily to 38 Studios' lore for the upcoming MMO based in the Kingdoms of Amalur and the single-player game made by subsidiary studio Big Huge Games this winter. Speaking to Bob Salvatore at PAX East 2012, he said he absolutely loved playing the action RPG, even though he is much more of a PC and tabletop gamer. But there were a few things he thought Kingdoms of Amalur: Reckoning could improve upon. First on the list: the gobbledygook fantasy names you were bombarded with as soon as you entered the world.

"I hated the names," Salvatore said. "That was the biggest fight I had with people." He created the names of the the different cultures and major characters, but the individual character names were all made up by Ken Rolston's team at Big Huge Games. Salvatore wrote the backstory of Amalur, but he didn't have a hand in the writing of the script. If he did, Salvatore might have handled it differently.

"Peter Jackson's LOTR movies did a great job of introducing characters by condensing the cast," Salvatore said. Movies tend to err on the side of less is more with naming conventions, and Salvatore wondered if games should consider condensing the amount of lore exposed to the player. The characters are what drives the players into the story.

"I loved the character of Alyn Shir," said Salvatore," and I wish she was in the game more." He also thought there might have been too many sidequests because, as a completionist, he felt too distracted by them to progress through the main story at the right pace.

All the quibbles aside, Salvatore absolutely adored the final product. "I wrote a long letter to Big Huge Games and I was almost crying as I wrote it," he told me. Salvatore is immensely proud of Kingdoms of Amalur: Reckoning, especially how fun the action combat ended up.

Salvatore and the rest of Curt Schilling's 38 Studios is busy working on the MMO set in the world of Amalur. There's still no word on the release date for that or how it will compete with The Old Republic or WoW, but work continues apace.

Meanwhile, based on Reckoning's critical and commercial success, I inferred from Salvatore that a single-player sequel might be in the works. If that's the truth, we may have more time to spend in Amalur before we can enter it massively. Given how much fun I had with Reckoning, I don't think that's a bad thing at all.