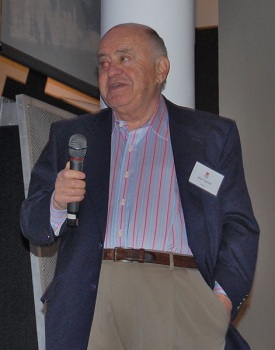 Jack Tramiel, the founder of Commodore International and in influential figure in the history of Atari, has died.

If you ever adored a 64 at any point in your life, then you have Jack Tramiel to thank. Tramiel, who survived the horrors of the Auschwitz concentration camp during the Second World War and emigrated to the U.S. in 1947, took his first sideways step toward becoming a legend in the world of technology when he opened a typewriter repair company in 1953, naming the business Commodore Portable Typewriter. In 1955 he launched Commodore Business Machines in Toronto to get around U.S. restrictions on imports - specifically Czechoslovakian typewriters - from Warsaw Pact countries.

With the help of investor Irving Gould, Tramiel rode the company through numerous ups and downs until 1977, when it launched its first computer, the Commodore PET. While successful, the PET these days is pretty much a footnote to the glory of the VIC-20, launched in 1980, and its follow-up, the one and only Commodore 64, which came to market in 1982. The C64 was a true phenomenon, selling anywhere from 12 to 30 million units depending on who you ask, making it the best-selling home computer of all time.

Tramiel was also a major figure in the evolution of Atari following his resignation from Commodore in 1984, after which he formed a new company called Tramel [not Tramiel] Technology Ltd. In July of that year Tramiel acquired the struggling consumer division of Atari Inc. from Warner Communications, which had purchased it from Nolan Bushnell in 1976, and rechristened Tramel Technology to Atari Corporation. In 1996 the company merged with JT Storage, but then sunk into bankruptcy a few years later.

"Jack Tramiel was an immense influence in the consumer electronics and computing industries," writer Martin Goldberg told Forbes. "His legacy are the generations upon generations of computer scientists, engineers, and gamers who had their first exposure to high technology because of his affordable computers - 'for the masses and not the classes'."

Tramiel, who died on April 8, is survived by three sons and his wife Helen. He was 83.