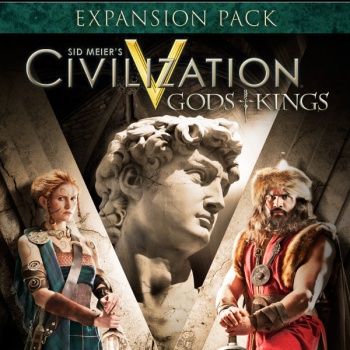 Religion and espionage spice up the massive mechanical overhaul to my favorite game from 2010.

More than any game from the last few years, Civilization V has chewed up massive amounts of my time. After talking to Dennis Shirk at PAX East this weekend, the producer of both the vanilla game and the expansion, it looks like Gods & Kings will result in more sleepless nights. The gentle overhaul of all the mechanics aside, there are so many new civilizations, units and game systems that playing it will feel like a whole new game. The Gods & Kings expansion will cost $30 when it comes out on June 19th (22nd outside the US) on Steam.

"We targeted Beyond the Sword as the amount of content we wanted to include," Shirk said, referring to the amazing expansion to Civilization IV. "I think in a lot of ways we have hit that and in some ways, especially in terms of new game systems, we surpassed it."

The big tickets in Gods & Kings are the religion and espionage systems. Religion was in Civ 4, but the way lead designer Ed Beach approached it is completely different and it changes as your culture becomes more advanced. There's a new resource called faith which acts like culture or science in that it's generated from buildings within your cities. Once you reach a set number of faith in ancient times, you can found a pantheon. The pantheon gives you one mechanical benefit or belief from a list of 20 or 30 - for example, if you found the Goddess of the Hunt, all your hunting camps produce more resources. Once you pick your pantheon, that choice is removed from the game so there is an element of speed to get the best pantheon for your civ.

"Pantheons are a halfway layer that introduces religion. With the pantheon, you just pick that one belief so it's like sticking your toe in the water," Shirk said. "Then you get a full-fledged religion when you go even further."

The religion system really opens up once you get to found an organized religion. You spend a certain number of faith (around 150 for the first one in a world) to design a religion from a bunch of different parameters. First is the icon - the ten or so available are based on real-world religions like Buddhism or Judaism, but you are free to rename your religion if are so inclined. Then you get to choose a belief that benefits you as the founder of that religion, as well as a belief for each city which converts to your new religion. These benefits are drawn from a pool just like pantheons are, and the number of religions is limited to half the number of civs in the game. If you start a map with 8 civs, only 4 religions can be founded, so there is an urgency to have your civ found one early on.

"I love playing a religious game now because it feeds into almost every strategy," Shirk said. "Seven out of ten games I play as Boudica [the Queen of the Celts, a new civ for G&K] because one of her traits produces faith for free from the start and her Pictish warriors reward you with one faith for every kill."

Espionage sounds just as engaging. In past Civs, you could build spies and send them all over the world, but beyond stealing some tech there wasn't much use for them. In Gods & Kings, you have a set number of spies at your disposal based on what era your civ is in, which sounds very much like a German board game concept. You can move your spies around the map, but it will take them a few turns to travel. Once they are in a city, you have the standard set of actions available like poisoning the water supply, etc. But the really cool addition is there's a chance your spy will learn some real intelligence about your enemy's plans.

For example, if you have a spy in Mumbai, he might learn Gandhi is plotting to attack China. That's a valuable piece of intel derived from the AI system itself, and if you then open up a dialogue with China, you have the option to inform Wu Zetian of Gandhi's plans. If you do, you'll gain a friend in the Chinese lady, while the warmonger Gandhi will be less happy with you. If you're more of a merchant-type, your intelligence can also be sold to the highest bidder, using your spies to make a quick bucket of gold.

"Once you receive the information, it sends a bit back under the hood, and if you go to a leader. Go into the discuss section and you'll now see options there that say 'I want to tell of these plans'" Shirk said. "I like to play the non-aggressive information broker in the late game."

There's so much other stuff to talk about, but let me summarize some of the more pertinent info I found out from the presentation and in talking to Shirk. Navies have been buffed substantially in usefulness, mostly because certain ships like the destroyer are now flagged as "melee". Before you scoff, that just means that they can capture coastal cities as if they were a land unit, and the increased vulnerability of coastal cities takes some getting used to. Also, the HP levels of units went from 10 hp to 100 hp so there is a lot more damage spread around. Siege weapons effectiveness against units has been decreased, while they will be absolutely necessary if you want to capture a city that has built a wall improvement. No more simply trying to overwhelm a city with massive amounts of warriors. Without siege, you are shit out of luck.

City-states have been changed so that you can't just buy their loyalty and two new types - religious and mercantile - ensure a more interesting variety. Religious cities will give you faith points if you're friends with them, while mercantile cities have unique luxury resources that are not available unless you buddy up to them.

The pacing of the game has been overhauled, including the entire tech tree. Shirk and Beach's team have tried to make sure units have a usefulness for a much longer period of time, a worry of mine because adding new units such as "Great War" biplanes and machine gunners would have been very difficult to play with if it kept the pacing of vanilla Civ V.

"The entire system of how units come out, the pacing, the cost, all of that stuff has been reworked," Shirk said. "If you look at the tech tree, there has been a lot of shifting around. We always wanted to get at least one tech level between each unit in the chain. We don't want you to get musketman here, and the very next tech you can get will give you a rifleman."

Based on all I saw, it looks like Gods & Kings will be a whole new game and I will never sleep again.