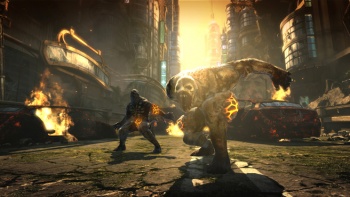 Early work on a Bulletstorm sequel has been called off in favor of other projects.

Bulletstorm was a bit of a bust but Epic President Mike Capps has no regrets and, as it turns out, even went so far as to give the green light to preliminary work on a sequel. Alas, that project is off the table, at least for now, although the good news is that Polish studio People Can Fly, which made the brilliant Painkiller prior to working on Bulletstorm, is apparently being put to good use elsewhere.

"We thought a lot about a sequel, and had done some initial development on it, but we found a project that we thought was a better fit for People Can Fly," Capps told Gamespot. "I'd love to go back [to Bulletstorm]. I think there's more to do with Bulletstorm. Heck, it kind of ended wanting more. I'd love to see another project, but right now we don't have anything to talk about."

Capps said the game was "very critically successful" and it wasn't a complete sales disaster, eventually topping one million copies sold, but it didn't quite meet EA's expectations. He claimed that piracy of the PC version was a "pretty big problem" as well, although he acknowledged that "it was a less than stellar port which may have hurt sales, too."

The PC version was definitely a little bit rough around the edges and gamers looking forward to a new Painkiller may have been let down as well. But in spite of the complaints, I maintain that Bulletstorm was truckloads of stupid, goofy fun, with great voice acting, hilariously juvenile dialog and the most gloriously wicked villain to come along in years. It's a pity the sequel is off, but knowing that Epic was actually thinking about it gives me hope that maybe someday, minds will change.