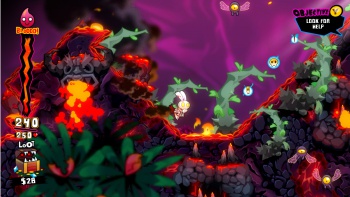 After an internet mishap with a rubber duckie, a demonic rabbit armed with a chainsaw jetpack sets out to eradicate the forces of hell. Yes, you heard that right.

When you set out to wander the halls of PAX East, you more or less know what to expect. The Rockstar booth is off at the far end of the show floor, demoing Max Payne 3. Warner Brother lures you from the other end of the exhibition with promises of Lollipop Chainsaw. Sega sits in the middle of the expo with long lines of fans waiting for a few minutes with their favorite blue hedgehog. If you venture right around the corner, however, you may notice that there is another game being demoed. The line for this one isn't nearly as long, but the colorful graphics, cartoony ultra-violence, and bizarre script catch your attention. This game is Hell Yeah!, a zany side-scroller from French indie studio Arkedo, published by Sega. While it lacks some of the cachet and fan following of its mascot neighbor, Hell Yeah! looks all set to scratch an itch for creative gameplay, referential humor, and buckets and buckets of bright red blood - although it may do so with a razor-sharp chainsaw jetpack. Really.

You may have played lots of games with wacky setups before, but you've probably never heard anything quite like this. Ash, a skeletal rabbit with angry, glowing eyes and a perpetual scowl, is the crown price of hell (no, not that other prince of hell). Life in the fiery abyss is just peachy, until one day, pictures of Ash doing an unspeakable deed with a rubber duckie surface on the internet. Before Ash can take down the offending photos, the damage has been done: one-hundred demons have already seen their lord and master compromised. Since that just won't do, Ash takes matters into his own hand and sets out to murder every last demon in his way in the most gruesome ways imaginable.

With a setup like this, it would be easy to fall back on a standard side-scroller setup and let the game's humor and charm (which it has in spades) pick up the slack. Thankfully, this is not the case. Hell Yeah! treads some familiar ground for platformers, but its central mechanic is fairly original. While Ash starts off defenseless, armed only with a harmless double-jump, he quickly claims his father's old "drill," which is more akin to a giant, bladed wheel of death. Ash rides inside the wheel which, when activated, starts spinning at full speed, cutting down anything in its path. The drill slices through enemies (who explode into bloody streamers) and weak points in the environment (which often reveal sparkling, rainbow-colored gems, the game's currency). If desired, Ash can deck out this wheel with a variety of skins, transforming it into a donut or - for those with a perverse sense of humor - a rubber duck inner tube.

After acquiring the drill, the game is fairly simple, if not necessarily easy. Described as a "Metroidvania" title, Hell Yeah! requires a little brainpower as well as reflexes. In order to get past locked doors, Ash must take down a number of unique demons in each area. Some of these demons require strategy to defeat (such as purchasing and aiming a missile launcher), but others are simply trapped behind environmental puzzles and can be sliced and diced at Ash's leisure. Each one has a unique death animation and quicktime event associated with it, from revving an engine to make a demon burst in a screen-covering blood spatter, to Ash launching himself from a bow and unleashing a hail of Cupid-esque arrows. Those with very refined tastes may groan at the excessive gore, but anyone with a dark sense of humor will be hard-pressed not to crack a smile during these sequences.

The writing matches the game's overall sense of humor well. During the brief demo, Ash referenced everything from Dragon Ball Z to Sonic the Hedgehog to "the goddamned Batman." Ash himself is a delightful little bundle of hatred and neuroses, who can't help but endear himself to the audience. Despite the fact that he is a petty, evil little bastard of a rabbit, he takes genuine delight in what he's doing, which helps the player laugh with him rather than condemn his behavior. Hell Yeah! has a lot going for it in terms of sheer absurdity, but it never uses outlandishness as a crutch.

The biggest issue with Hell Yeah! (discounting that you are perhaps a decent person, and hence do not find a skeleton-rabbit dismembering things funny) is that its controls haven't been quite nailed down yet. Movement controls with the drill can be flighty, especially while jumping. Ash has a funny sense of momentum while moving side to side, either on the ground or in the air, so an attempt to evade an enemy or drill into a certain foe will often result in taking damage or falling into a nearby pit. Ash needs a little more weight and certainty to his movements, especially when making complicated jumps or facing off with large enemies. The missile controls, too, are problematic, as they rely on an uncomfortable thumbstick-button combination that can often send the projectiles far afield of their targets.

Hell Yeah! is an innocuous little title with a few problems and a ton of heart. With a little more polish, this could be one of the most agreeably bizarre titles to grace the downloadable game scene in a while. Whether you love or hate the concept, though, Hell Yeah! will most likely warrant at least a demo playthrough for side-scroller fans when it comes out later this year on XBLA, PSN, and Steam. It's weird, it's funny, and, most of all, it's unexpected. In an industry that tends to favor safe ideas and sequels, that in and of itself is something special.