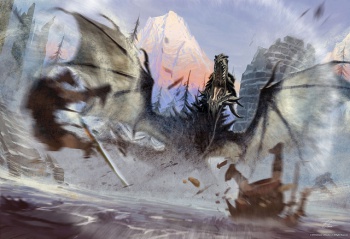 Fus Ro Dah. Three simple syllables that are now permanently etched into the brains of anyone who played The Elder Scrolls V: Skyrim. Now ZeniMax hopes to leverage that awareness into a range of other money-making opportunities by turning the phrase into its own brand.

As of April 4, the company had submitted six separate trademark applications with the United States Patent and Trademark Office for the phrase, all of which strongly hint at the use of those three non-words in upcoming products ranging from the expected ("on-line interactive computer games") to the frankly baffling ("eyeglass cases").

Fusible gathered the six applications together for handy persual:

As the site points out, this could be a relatively standard attempt by the company to maintain its exclusive rights to the now-famous phrase, but the wide ranging scope of the applications also suggests that ZeniMax has big plans for the Shout.

Until we get clear indication that the company is going to offer Fus Ro Dah merchandise, we can't necessarily say that we'll ever see fleece pullovers emblazoned with those magic words, but we can speculate wildly.

Personally speaking, I'd jump at the chance to own a cosmetic bag that simultaneously baffles onlookers and loudly proclaims my frightening allegiance to a high fantasy roleplaying game. Nothing impresses the ladies like a man with a gaming-themed tote full of nail polish -- or so I've been assured by snickering teenaged girls.